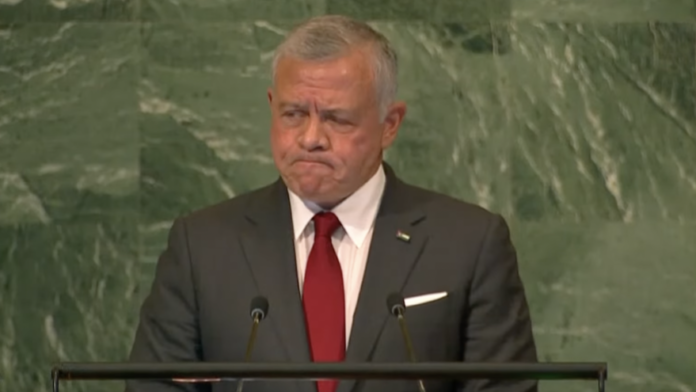 During his address to the U.N. General Assembly, Jordan’s King Abdullah II claimed that Christianity in Jerusalem is “under fire.”

Abdullah, who sees Jordan as the custodian of Muslim and Christian holy sites in the city, said the “future of Jerusalem is an urgent concern.”

“Undermining Jerusalem’s legal and historical status quo triggers global tensions and deepens religious divides,” he said. “The Holy City must not be a place for hatred and division. As a Muslim leader, let me say clearly that we are committed to defending the rights, the precious heritage and the historic identity of the Christian people of our region. Nowhere is that more important than in Jerusalem.”

“Today, Christianity in the Holy City is under fire. The rights of churches in Jerusalem are threatened,” the king said. “This cannot continue. Christianity is vital to the past and present of our region and the Holy Land. It must remain an integral part of our future.”

A spokesperson for Christians United for Israel (CUFI) disputed Abdullah’s remarks, saying that “Jerusalem never knew true peace or prosperity until its liberation by Israel.”

Robert Nicholson, president of the Philos Project, pointed out that the monarch made no mention of Christians suffering in other countries.

“Sadly, in his recent remarks, Christians suffering in countries not named Israel didn’t get a mention,” Nicholson told JNS. “We need King Abdullah II’s voice for all Christians all the time. Among Arab leaders, he’s our greatest ally.”

He called it “vital” that King Abdullah “not limit his attacks to Israel or fold his advocacy into unrelated advocacy for the Palestinian national platform.”

“The man responsible for the Amman Message and for taking in hundreds of thousands of Christian refugees knows the full scope of the problems the region is facing, and it’s vital that he explain them,” Nicholson added. “The Christian issue is not a political issue and must be addressed by the region’s leaders in a holistic, collaborative way.”

King Abdullah’s comments come at a time when Israel’s relations with Jordan are growing colder, even as ties grow warmer with other Arab states, said Jonathan Schanzer, senior vice president of research at the Washington, D.C.-based Foundation for Defense of Democracies (FDD).

“One gets a sense that the king is doubling down on his role of custodian of Jerusalem, but the purpose of this is not clear,” Schanzer told JNS. “I see Israeli officials growing increasingly frustrated with the Jordanian rhetoric even as they work to safeguard the Kingdom. One gets a sense that this path is not sustainable.”

“Under Israeli rule since 1967, there has been a clear effort to ensure religious freedom for all three monotheistic faiths,” he said. “I don’t think anyone could argue that Christian holy sites are imperiled in any way. There could be frustration among Palestinian Christians for political reasons.”

Schanzer pointed out that Israel provides Jordan with crucial assistance in the areas of water, gas, intelligence and security.

While negative public rhetoric is often motivated by Jordan’s large Palestinian population, Schanzer says that behind closed doors, the relationship is less confrontational.

“It’s no secret the Jordanians are antagonistic publicly while privately they continue to engage in fruitful cooperation, but I would say that this dichotomy is increasingly unsustainable,” he said.

In the last two years, Jordan has refrained from taking part in normalization events, including the Negev Summit in March, which hosted the foreign ministers of Bahrain, Egypt, Morocco, and the UAE.

“There are new alliance structures in the region, and the Jordanians have clearly opted to stand outside of them,” said Schanzer. “Jordan has dropped from the warmest peace with Israel some five years ago to the coldest.”

Lapid expressed the need for “calming the situation on the ground and halting terrorism” ahead of the upcoming Jewish High Holidays, according to a statement from the Prime Minister’s Office.

The statement called the meeting an “expression of the tightening of Israel-Jordan relations” and “the continued strengthening of the personal connection” between the two leaders.