“You’ve been living inside 1600 Pennsylvania Ave. for the last four years,” Christie said. “If you don’t think you can change Washington from inside the White House let’s give you the plane ticket back to Chicago you’ve earned.”

Christie riled up the Richmond crowd saying that Obama is arrogant for believing he can’t change Washington politics.

“If he believes that, then what the h— is he doing asking for another four years?” Christie said. “We’re happy to give you a bus ticket to the outside, Mr. President.”

Christie added that Obama is “blindly walking around the White House looking for a clue.”

“He’s like a man wandering around a dark room, hands up against the wall, clutching for the light switch of leadership and he just can’t find it.”

Trump Abruptly Pulled From Briefing After Shooting Outside White House 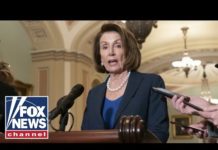