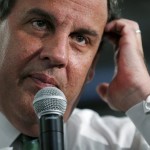 Chris Christie’s presidential campaign would like you to know that he is sorry—so very, very sorry—for disrupting the peace and serenity of Amtrak’s quiet car during his Sunday morning commute, Olivia Nuzzireports for the Daily Beast.

Gawker reported that Christie arrived late on the 9:55 Acela from D.C. to New York, gulping a strawberry smoothie from McDonald’s, and proceeded to cause a scene.

A passenger on the train, Alexander Mann, told Gawker, “He got on last minute yelling at his two secret service agents I think because of a seat mixup, sat down and immediately started making phone calls on the quiet car.”

A major faux pas. Citizens of the quiet car are so serious about their quiet time that they have been known to glare at passengers who type too loudly. After 10 minutes of causing pain and suffering to those around him, according to Gawker’s source, the conductor of the train asked Christie to either stop yapping or move to another car. “He got up and walked out again yelling at his secret service.”

Olivia Nuzzi reports that Christie doesn’t have secret service protection—none of the candidates besides Hillary Clinton do—though he does have his own security detail. Christie’s campaign told The Daily Beast that they dispute the claim that he was screaming in the quiet car, and they don’t know if it’s true that Christie repeatedly said, “this is frickin’ ridiculous,” and “seriously?! seriously!?”

“After breaking the cardinal rule of the quiet car,” Smith said, “the Governor promptly left once he realized the serious nature of his mistake and enjoyed the rest of his time on the train from the cafe car.”

She added, “Sincere apologies to all the patrons of the quiet car that were offended.”