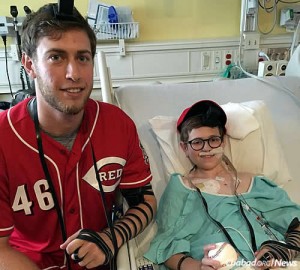 While sports players and other celebrities often visit children in hospitals, it’s rare that the two end up putting tefillin on together. It’s rarer still that the experience becomes the start of a long-term plan to spread awareness and raise money for other sick kids.

Avi Newhouse, 13, from the New York metropolitan area, is currently in the Cincinnati Children’s Hospital undergoing treatment for a rare form of lymphoma that has robbed him of the ability to ingest food and has pretty much put his life on hold.

Jon Moscot, 23, a California native, is a rookie pitcher for the Cincinnati Reds. Together, the two are busy making plans to encourage athletes to wear gold this September to draw attention to pediatric cancer.

They were brought together by two Chabad rabbis: Yisroel Mangel of Cincinnati and EliBaitelman of the Pacific Palisades, Moscot’s hometown.

“It all began,” explains Mangel, “when I saw a post on social media from Avi’s mother, Leah Newhouse, asking if anyone knew of a professional athlete who would be able to visit her son, an avid Yankees fan who could use a bit of cheering up. I immediately thought of Jon, whom I had been introduced to by his rabbi, Rabbi Eli Baitelman.”

Moscot says his inspiration for visiting children in the hospital—something he has done before—and reaching out to others in need is a value he learned as a child attending Hebrew school, services and other celebrations at Chabad of Pacific Palisades, directed by Rabbi Zushe Cunin. 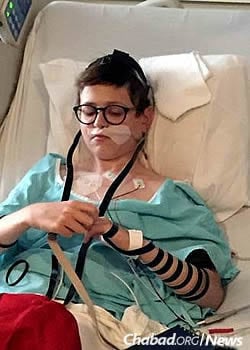 Moscot says at first, Avi was lying lethargically in bed, though he lit right up and started talking baseball.
“Chabad shaped my character to do mitzvahs,” he says. “The atmosphere of love and kindness is bound to have an effect on you, no matter who you are. So as soon as I heard there was a Jewish kid in the hospital—knowing that there aren’t many Jewish athletes out there—his plight was immediately relatable to me.”
Before the visit, Mangel, director of the Chabad Jewish Center in Cincinnati, told Moscot that he would be bringing tefillin for him to put on—something the ball player admits he had neglected in the years following his bar mitzvah at Chabad.
When the rabbi came into the room with the tefillin bag, Leah Newhouse turned to him and said with surprise, “How did you know?” Avi had been putting on tefillin every day with the help of his father in the months since his bar mitzvah. But since his father was not present that time, she had been wondering who would help her son do so that day. 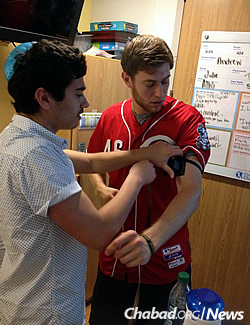 Putting on tefillin, which Moscot admits he has neglected in the years following his bar mitzvah.

Moscot says that when he first came in, Avi was lying lethargically in bed, not smiling, appearing to be in pain. “But as soon as I began to speak to him,” he recalls, “he perked right up. I was actually very impressed by how much he knew, quoting baseball stats. It’s rare to find someone who really knows baseball that well. He is a Yankees fan, so we were able to talk about some Yankees players that I know, which was nice.”

Moscot would later learn from Leah Newhouse that their visit was the first time Avi had smiled in a week.

Then the two strapped up in tefillin and took a few minutes to say the Shemaprayer.

In the days since their meeting, Moscot says the two have been in regular contact via text as they coordinate Avi’s effort to enlist athletes to wear special wristbands and gold colors next month in support of pediatric cancer.

“Going through chemo tires you out, makes you nauseous, makes you weak,” Newhouse posted on Instagram. “Most people just see pediatric cancer as ‘the cute bald kids running around in Disneyland,’ but trust me, it’s really not like that.”