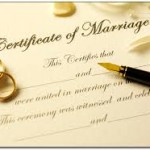 Davis had turned away couples in the days following the U.S. Supreme Court decision that legalized toeivah marriage. Two toeivah couples and two straight couples sued the clerk and a federal judge ordered Davis to begin issuing the licenses.

An appeals court upheld that decision and Davis’ lawyer filed a final appeal to the Supreme Court on Friday.

“She’ll report to work tomorrow, and face whatever she has to face,” said Mat Staver, founder of the law firm representing Davis. Read more at WKYT.