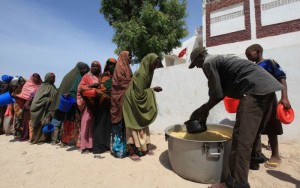 A World Bank report released Sunday warned that if countries fail to sustain policies to reduce the rise of global warming, an additional 100 million people could be driven into poverty by 2030. The report argues that addressing climate charge will be essential to ending global poverty as poor people are hit the hardest by crop failures, extreme weather, spikes in food prices, and waterborne diseases.

Last month, the World Bank projected the number of people in poverty is expected to drop to 9.6 percent of the world’s population, down from 12.8 percent in 2012.

The new report emphasized that failure to address climate-change issues, such as reducing greenhouse-gas emissions, threatens that goal. Read more at World Bank.