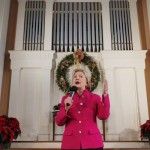 “Think about it. One of these Republicans could actually be president,” the ad’s narrator says as Republican presidential candidates Donald Trump and Ted Cruz are shown talking about bombing American enemies.

“They’re backward, even dangerous,” the narrator adds, saying that Clinton is the only Democrat who “can stop them.”

The ad, titled “Incredible,” is set to air in New Hampshire and Iowa.

A Republican National Committee spokesman slammed Clinton for “doubling down” on “failure.”

“Under President Obama we’ve become less prosperous, less safe, and less free but incredibly Hillary Clinton wants to not only double down but expand on this legacy of failure,” spokesman Michael Short said in a statement.

Watch the ad below: