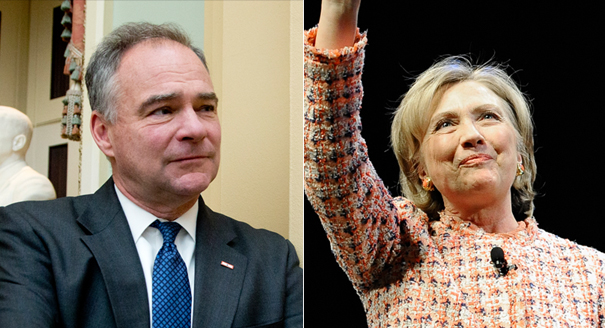 The newly formed Democratic ticket took the stage for the first time in Miami, showing off a partnership that prizes steadiness over flashiness.

“Senator Tim Kaine is everything Donald Trump and Mike Pence are not,” Clinton said. “He is qualified to step into this job and lead on day one. And he is a progressive who likes to get things done!”

As if to prove to those wondering, Kaine put on display the textured biography, long résumé and demeanor that helped him become the last man standing in Clinton’s running mate search. He presented himself as pubic servant whom people from a wide range of upbringings and ethnicities could find something to identify with. And in essence he did one thing Clinton has struggled to do in this campaign: convey authenticity.

The two launched their political marriage here to a crowd of more than 5,000 at Florida International University, a campus that is two-thirds Hispanic. The diverse audience waved American flags and Puerto Rican flags as they waited – in some cases for hours – for Clinton and Kaine to take the stage.

After months of deliberation, Clinton announced Friday night that she had chosen Kaine, passing over other candidates who offered more diversity for a self-described “boring” white man from Virginia.

But four seconds after opening his mouth, Kaine thrilled the crowd by speaking Spanish.

“Bienvenidos a todos en nuestro pais. Porque somos americanos todos,” Kaine said. “Welcome to everyone in our country, because we are all Americans.”

Kaine had long been a front-runner for the job. He was passed over by President Obama for the vice-presidential job in 2008, but in the intervening years, Kaine beefed up his resume, winning a Senate seat in a key swing state, serving on the Senate Foreign Relations Committee to accrue foreign policy experience and establishing himself as a well-liked pragmatist.

All along, Clinton’s aides and allies said that her top priority was finding a partner who would not just help her govern, but who is also qualified and prepared to do the job from day one.

Kaine – a former governor, mayor and Democratic National Committee chairman – outstripped other contenders with a background that satisfied that qualification, she said.

“There’s no doubt in my mind that Tim is qualified to be vice president,” Clinton said. “At every stage in his career, the people who know him best have voted to give him a promotion.

“That’s because he fights for the people he represents and he delivers real results,” she said.

Almost immediately, Trump began criticizing Clinton’s pick on Twitter, claiming that Kaine is “owned by the banks” and criticizing him for accepting gifts as governor of Virginia, a practice that was legal at the time in the state.

But other Republicans offered praise for the Democrat.

Sen. Jeff Flake (R-Ariz.) declared on Twitter that he had nothing negative to say about Kaine.

“Trying to count the ways I hate Tim Kaine,” he wrote. “Drawing a blank. Congrats to a good man and a good friend.”

Indeed, Kaine’s relatively sterling reputation in Washington may be one of his biggest assets in a race that will feature two of the most disliked party nominees in history: Clinton and Trump.

Clinton noted that the two share a lot of history. Both grew up in the Midwest with fathers who were small-business owners. Both graduated from law school to practice law in public service careers. And Kaine, a Roman Catholic, and Clinton, a Methodist, both grew up with faith at the forefront of their lives, she said.

“As you get to know Senator Kaine, you will see that his lifelong commitment to social justice is a shining example of his faith in action,” Clinton said.

On policy, Kaine highlighted one of his core agreements with Clinton on an issue that she has made a centerpiece of her campaign: gun control.

Kaine served as governor during the 2007 mass shooting at Virginia Tech, which he emotionally recalled as “the worst day of my life.”

“When the vast majority of Americans and a majority of [the National Rifle Association] members agree that we have to enact common sense gun safety measures, Hillary and I will not rest,” Kaine said. “We will not rest.”

The appearance comes just days before Democrats will gather to host their party’s convention in Philadelphia. And it follows the Republican convention in Cleveland, which was characterized by the public airing of controversies and intraparty divisions.

With Kaine on the ticket, Clinton is doubling down on her key argument against Trump: that she would be the steadier hand, prepared to take on the domestic and international challenges that the country faces.

“More than anything, what she’s selling is temperament and reliability versus concerns about Trump’s temperament and his impulsiveness,” said David Axelrod, a senior aide in Obama’s presidential campaigns. “Kaine is solid as a rock and will project a sense of stability.”

Clinton called Kaine at 7:32 p.m. Friday to offer him the job. Hours earlier, as Kaine traveled in New England for fundraisers, he told his audience that he “honestly” did not know whether he had been picked.

The deliberations were shrouded in secrecy for months, with only Clinton, family members and close campaign aides having any idea of what she would decide.

According to a person familiar with the plans for Clinton’s events in Florida, the campaign did not tell staff members on the ground who or even whether a vice-presidential pick would be announced at the events in Tampa on Friday or in Miami on Saturday. The events were planned to accommodate a number of possible running mates.

By the time the midday rally began Saturday, newly minted “Clinton-Kaine” signs were hanging from the rafters, and a slightly altered playlist included some country music tunes, perhaps a nod to the running mate’s Virginia ties.

While Democrats caution that vice presidents rarely make or break an election, Kaine’s connections to Virginia, a key battleground state, is a bonus.

And facing a Republican opponent like Trump who has run a fundamentally unconventional race, the pick demonstrates that Clinton opted not to insert any unnecessary risk into the race.

Other candidates might have injected greater enthusiasm in the most liberal corners of the Democratic base, but Kaine’s pragmatism could also help Clinton attract support from middle-of-the-road suburban voters or Republicans who are unsure of whether they could support Trump.

Still, progressive groups balked at her pick of Kaine, who they said does not reflect the party’s leftward shift. For example, Kaine initially supported the Trans-Pacific Partnership, a trade deal opposed by labor groups and some in the Democratic party’s base.

Kaine’s allies dispute that he is anything other than a progressive Democrat. And when it comes to unifying the party, Kaine deployed a tried-and-true tactic: skewering Trump.

All the while, the crowed interrupted him with boos for Trump.

On the campaign trail, Kaine’s Midwestern roots shine through. The Missouri native projects a folksiness that belies his Ivy League education, which, given Clinton’s challenges with white male voters, could prove to be an asset.

He recalled working in his father’s iron shop and teaching those skills to kids in Honduras. He spoke at length about his father-in-law, former Republican Virginia governor Linwood Holton, who in the 1970s integrated the state’s schools. And he relayed the advice his mother gave him: “If you want to be right, be a pessimist. If you want to do right, be an optimist.”

Kaine is also a surprisingly apt fit for launching Clinton’s vice-presidential pick in a state such as Florida, a critical battleground with a large number of Hispanic voters. Kaine showed off his Spanish-language skills at several points in his remarks, including to call for comprehensive immigration reform.

His fluency will allow him to be a surrogate in Spanish-language media. But by turning down several potential Latino running mates, Clinton and the Democrats will need to look elsewhere for ways to drive up turnout from Hispanic voters, a key bloc of the Democratic base.