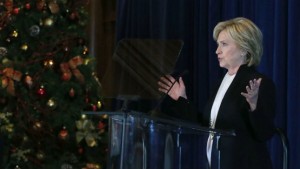 Democratic primary front-runner Hillary Clinton says the escalating conflict with the Islamic State in Iraq and Syria (ISIS) is a battle between “hate and hope,” not against the Muslim religion.

“I think it’s important to remind ourselves that Islam itself is not our adversary,” Clinton said at the Brookings Institute’s Saban Forum in Washington, D.C., on Sunday. “This is not, and we should not let it become, a clash of civilizations.”

“It is a clash between hate and hope, and the vast majority of Muslims are on our side of the battle unless we drive them away,” she added.

The former secretary of State said branding Muslims as terrorists serves as a potent recruiting tool for those who use the faith to justify violence.

“Declaring war on Islam or demonizing the Muslim-American community is not only counter to our values, it plays right into the hands of terrorists,” she said.

She called on Americans to stop “scapegoating” peaceable Muslims, but also acknowledged that the Islamic faith does play a role in international terrorism.

“We should be supporting them, not scapegoating them,” she said. “But, at the same time, none of us can close our eyes to the fact that we do face enemies who use Islam to justify slaughtering innocent people,” she said. “We have to stop them, and we will.”