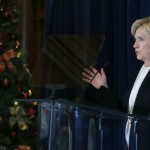 Republican presidential candidates are blasting Hillary Clinton over the Democratic frontrunner’s assertion that the United States is “finally where we need to be” in the fight against the ISIS — and her unsubstantiated claim that the terror group is using a video of Donald Trump’s anti-Muslim rhetoric as a recruiting tool.

“We now finally are where we need to be,” Clinton said during Saturday’s Democratic debate in New Hampshire. “We have a strategy and a commitment to go after ISIS. … And we finally have a U.N. Security Council resolution bringing the world together to go after a political transition in Syria.”

Her GOP rivals and other top Republicans pounced.

“No @HillaryClinton,” former Florida Gov. Jeb Bush tweeted. “We are not ‘where we need to be’ in fight against ISIS.”

“Oh my gosh. With dead bodies in Paris, dead bodies in San Bernardino and no plan from this administration to deal with it, we’re finally where we need to be?“ New Jersey Gov. Chris Christie said on ABC’s “This Week With George Stephanopoulos” on Sunday. “Mrs. Clinton is Mrs. Happy Talk, and she just wants to happy-talk her way to the presidency. She is a personification of this administration: Are you going to believe me or your lying eyes?”

“She’s wrong,” Carly Fiorina said on “Fox News Sunday,” saying Clinton will “lie as long as you can get away with it.”

“It’s pretty clear from what Hillary Clinton said last night that she thinks things are just fine,” Senate Majority Leader Mitch McConnell said. “This illustrates the election of Hillary Clinton would be a third term for Barack Obama’s foreign policy.”