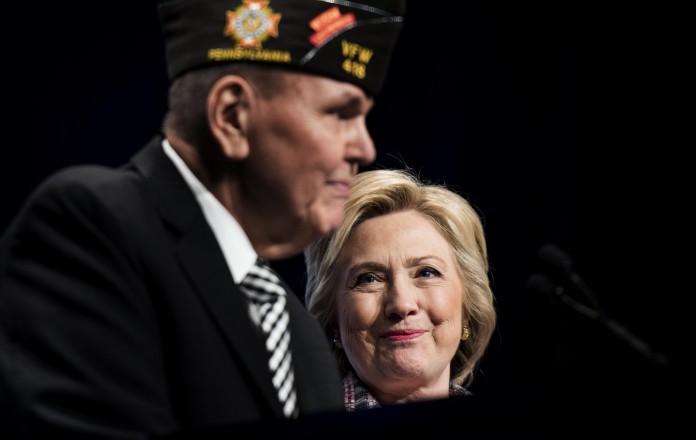 Charlotte, N.C. – Hillary Clinton on Monday sought to contrast what she would bring to the role of commander in chief with the qualifications of her Republican rival, pledging to stand by U.S. allies and consult widely with foreign policy experts before acting.

“I am not a newcomer to these issues,” Clinton said in a speech here to a national convention of the Veterans of Foreign Wars, citing her experience as secretary of state and her service on the Armed Services Committee while a U.S. senator.

Clinton also noted to her largely male audience that she is the first woman to be the presidential nominee of a major political party and acknowledged “it takes a little getting used to, even for me.”

During her address — which came as Democrats were convening in Philadelphia for the Democratic convention — Clinton never mentioned Republican nominee Donald Trump by name. But she took repeated jabs at him, referring to controversial statements he has made about military and national security issues.

Clinton, for example, stressed the importance of “standing with our allies, because they are part of what makes us exceptional.”

Trump alarmed many in the country’s foreign policy establishment when he was quoted last week in a New York Times story that as commander-in-chief he would not automatically come to the defense of America’s NATO allies if they were attacked.

Clinton also described her efforts with Sen. John McCain (R-Ariz.) to raise money for the Intrepid Fallen Heroes Fund, an organization that aids military personnel and their families.

“I believe that he and all American prisoners of war are heroes,” Clinton said of McCain, a reference to Trump’s comments in January that McCain was not a war hero because he had been captured.

Clinton also referred to the confidence Trump, a real estate mogul, has expressed in his own judgment, telling her audience, “You will never hear me say that I only listen to myself on national security.”

Her comments came on the same day that Clinton formally claimed the endorsement of retired Marine Gen. John R. Allen, another move by her campaign intended to bolster her military and national security credentials.

Allen is a retired four-star general who served as commander of the International Security Assistance Force overseeing NATO troops in Afghanistan and as deputy commander of U.S. Central Command.

His allegiance to Clinton was hardly a secret, given that Allen was recently announced as a speaker on Thursday at the Democratic National Convention.

Clinton has been a regular visitor to North Carolina in recent weeks.

President Barack Obama narrowly carried the Tar Heel State against Republican John McCain in 2008 but lost the state in his 2012 re-election to Mitt Romney. This year, it is among eight states that the Clinton campaign has targeted with early advertising, with an eye toward winning over a continuing influx into the state of professionals in the urban and suburban areas and a sizable African American population.

Clinton also plans Monday to talk to campaign volunteers in Charlotte at an event where aides say she will highlight an ongoing nationwide voter registration effort.