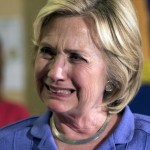 Hillary Clinton took aim at fellow White House hopeful Donald Trump over his call to ban Muslims from entering the United States, saying: “I no longer think he is funny,” AFP reports.

Appearing on NBC’s “Late Night with Seth Meyers” late Thursday, the front-runner for the Democratic presidential nomination said Trump had overstepped the mark with his latest comments.

“You know, I have to say, Seth, I no longer think he is funny,” Clinton said, according to NBC News.

“I think for weeks you and everybody else were just bringing folks to hysterical laughter, but now he has gone way over the line.

“And what he is saying now is not only shameful and wrong, it is dangerous.”

Trump, the front-runner for the Republican nomination, came under fire at home and abroad this week for his proposal to temporarily bar Muslims from entering the US. It came in the wake of last week’s shooting by a Muslim couple in Sen Bernardino, California, that left 14 dead.