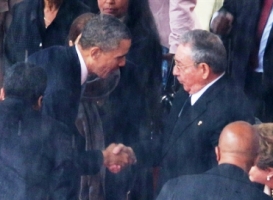 For those who believe in human rights and liberty, the sight of our president bounding up some stairs to energetically shake hands with Raul Castro, dictator of Cuba, was more than a little unsettling — regardless of the circumstance. But that’s what President Obama seemed to go out of his way to do at Nelson Mandela’s memorial service Tuesday. Although Castro has imprisoned American Alan Gross for four years now, CNN alternately applauded and made excuses for the handshake.

Obviously worried that shaking hands with a dictator might hurt Obama politically, the media were quick to play goalie. CNN’s Chris Cuomo went so far as to read Obama’s mind and report on the president’s true intent:

And that handshake obviously was a huge moment. But not to be misunderstood, the handshake with Raul Castro, the president of Cuba, we believe was President Obama showing respect to Nelson Mandela and the occasion of today, the spirit of reconciliation. Of course, it will be dissected politically. …
No matter the ongoing political disputes, on this day, it was about something bigger. It was about forgiveness and reconciliation, because it was about a man who was bigger: Nelson Mandela. And that is what the tribute has been all about today.

Cuomo never bothered to mention that Castro is a dictator.

UPDATE: Reporting during the 9am hour, CNN’s Jim Acosta said that it “would have been sort of impolite” for Obama not to shake hands with Raul Castro. Carol Costello suggested that the handshake “surely helps” to thaw the Cold War mentality between Cuba and America. Acosta reminded Costello that Cuba is in its fourth year of holding American Alan Gross. At no time did Costello or Acosta correctly refer to Castro as what he is: a dictator.

The Weekly Standard grabbed CNN video of an excited Chrstiane Amanpour: “Castro, he’s shaking hands with Raúl Castro! … This is a man, it is so true, who brought people together in life and he continues to bring people together today.”

Leave a Reply to A. Letz Cancel reply