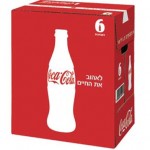 Coca Cola Israel has recalled all 1.5 liter Coca Cola bottles that have a sell by date of September 25 2016 due to an aftertaste. The company said that it has also informed the Ministry of Health on the matter and added that laboratory tests found that the ingredients in the beverage raises no health concerns and that the aftertaste was mild.

The Central Bottling Company added that it was taking this measure out of its commitment to consumer satisfaction and that all bottles from this production series were also being taken off Israel store shelves.

The Central Bottling Company said that all consumers with such a bottle of Coca Cola in their possession should contact the company’s customer service call center at 1-800-587-587 to arrange returning the bottle and receiving compensation.

Leave a Reply to Just me Cancel reply