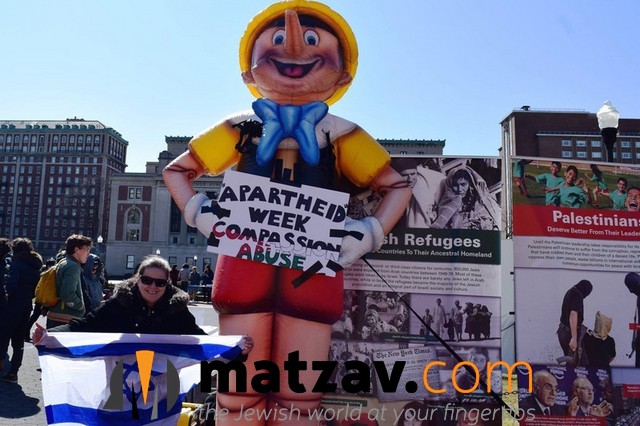 The ZOA criticized Columbia University and the Columbia University Student Government for violating pro-Israel students’ First Amendment rights and civil rights by banning and forcing the removal of a pro-Israel Pinocchio balloon display – just 90 minutes after the display was erected by Artists 4 Israel – despite the fact that the pro-Israel students had obtained the necessary permits for the display. The Chair of Columbia’s student government, Mariam Elnozahy, who is also a member of the anti-Semitic, anti-Israel Hamas-affiliated hate group, Students for Justice in Palestine (“SJP”), ordered the removal of the pro-Israel display while wearing an Israel Apartheid Week T-shirt calling for Boycotts, Sanctions, and Divestment (BDS) against Israel. The Vice-Chair of Columbia’s student government, Karim Nader, accompanied Elnozahy while wearing a Palestinian keffiyeh.

It is an outrage that anti-Semites such as SJP are permitted to freely exhibit their enormous, venomous, defamatory anti-Semitic, anti-Israel displays on the Columbia University campus – while Jewish and pro-Israel students are banned from exhibiting displays that challenge SJP’s anti-Israel lies.

Last year, the David Horowitz Freedom Center listed the once-great Columbia University as the university having the worst anti-Semitic activity in the country, and explained that Columbia University is home to the “most well-known antisemitic professors in the nation such as Rashid Khalidi and Joseph Massad, who has been accused of harassing Jewish students on multiple occasions. In addition, it is home to a highly active SJP chapter that has recently brought BDS founder Omar Barghouti and disgraced anti-Semitic professor Steven Salaita to campus.”