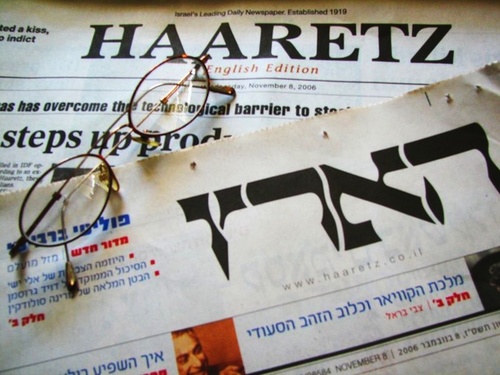 A renowned liberal American columnist announced on Tuesday that he was done reading the left-wing Israeli daily Haaretz, due to its “sub-par” articles and “hateful invective” against Israel, which, he said, is exploited by antisemites to illustrate the ills of the Jews and the Jewish state.

The Atlantic’s Jeffrey Goldberg, famous in particular for his highly publicized one-on-one interviews with US President Barack Obama, aroused the ire of Haaretzreporters and editors when he tweeted his intention to take a breather from the publication, explaining his move by linking to a recent op-ed in the paper titled, “We’re American Jewish Historians. This Is Why We’ve Left Zionism Behind,” written by Hasia Diner and Marjorie N. Feld.

When called to task by an angry Haaretz reporter, Anshel Pfeffer, Goldberg responded: “Look, when neo-Nazis are e-mailing me links to Haaretz op-eds declaring Israel to be evil, I’m going to take a break, sorry.” This tweet was accompanied by a link to a piece by notorious Israeli far-Left columnist Gideon Levy, titled: “Stop living in denial, Israel is an evil state.”

@AnshelPfeffer Look, when neo-Nazis are e-mailing me links to Haaretz op-eds declaring Israel to be evil, I’m going to take a break, sorry.

After Haaretz readers and writers continued to attack Goldberg for his criticism, he tweeted: “I like a lot of the people at Haaretz, and many of its positions, but the cartoonish anti-Israelism and anti-Semitism can be grating.”

Pfeffer was not satisfied, tweeting: “The problem is the Occupation, not @Haaretz presenting its consequences.”

“I don’t believe that the occupation is the only problem Israel is confronting,” Goldberg rebutted.

Goldberg also re-tweeted a comment by political analyst John-Paul Pagano, who wrote, “It’s not just neo-Nazis. A wide variety of Israel-haters tokenize u [Haaretz] as the Jews in their corner.”

The Twitter war, which began in the morning and lasted all day, suddenly took a turn in an unexpected direction, when Haaretz’s political nemesis and market competitor, The Jerusalem Post, entered the fray.

Responding to critics and questions by followers, Goldberg tweeted: “For those who are asking — in English, I find the @TimesofIsrael to be very reliable. Ha’aretz has some good reporters. JPost is nuts.”

The Times of Israel is an online news and opinion site, whose founder is David Horovitz, former editor-in-chief of the Jerusalem Post. The JPost’s current editor, Yaakov Katz, responded to the dig by tweeting: “If ‘nuts’ means being a Zionist newspaper w/objective news & balanced oped from across political spectrum, then thanks.”