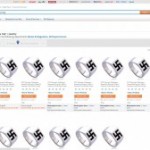 “Disgusting,” said Rabbi Abraham Cooper of the Simon Wiesenthal Center, in comment on the incident to The Algemeiner.

“I see it was on sale in Sweden which means if Sears offered it there is a market,” he wrote in an email. “Woe to the society that treats the ultimate symbol of evil as a mere trinket.”

A spokesman for the firm told Delaware Online that independent third-parties posted the “CET Domain Sideways Swastika Ring for Men’s Fashion Punk Rock Style,” and that the advertisement violated company rules for the site.

“We are contacting the sellers to strongly voice our concern over their lack of judgment,” Sears Spokesman Brian Hanover said.

While the rings do appear in the site’s search engine results as of Monday afternoon, Sears has pulled them from the backend, and clicking into a link leads to a 404 – dead link page.

It is unclear if the rings are available at any of the chain’s brick and mortar stores.

Meanwhile, at least one Jewish federation leader told local WDEL Radio that they were “horrified,” to see the rows of rings on the marketplace site.

“I just was horrified at the lack of sensitive[ity] by Sears to even market that, that horrible offensive, insensitive symbol,” Ellen Bernhardt, the director of the Jewish Community Relations Committee for the Jewish Federation of Delaware, told the station.

“Sears being such a national, well-known brand, a huge corporation that they would issue an apology; I’d be kind of surprised if they didn’t frankly,” she said.

“For the people at Sears not to have been aware of that or to lack the sensitivity or knowledge that that swastika is a symbol of destruction and annihilation of millions of Jews is just reprehensible,” Bernhardt said.