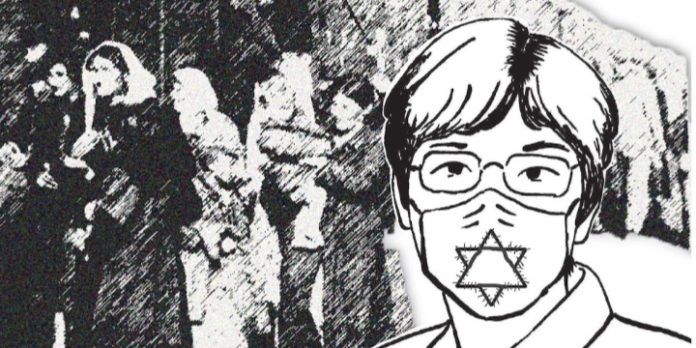 Controversy erupted over the weekend after a Kansas newspaper posted a cartoon comparing an order to wear masks due to the coronavirus pandemic to the deportation of Jews to the Nazi gas chambers during the Holocaust.

The weekly Anderson County Review, whose publisher Dane Hicks is a Republican county chairman, posted the cartoon on Friday on its Facebook page.

It shows Democratic Kansas Governor Laura Kelly, who issued the order to wear masks last week, wearing a mask emblazoned with a Star of David. Behind her is an image of Jews being loaded on to trains bound for a concentration camp.

The caption to the cartoon reads, “Lockdown Laura says: Put on your mask…and step onto the cattle car.”

Rabbi Moti Rieber, executive director of Kansas Interfaith Action, said the Holocaust comparison is “odious” and the image was antisemitic.

“This thing is like the trifecta of garbage,” he said, and added that Republican leaders should condemn it and Hicks.

Hicks, however, remained defiant, saying editorial cartoons are “gross over-caricatures designed to provoke debate and response” and that he would not apologize, The New York Times reported.

“Apologies: To whom exactly?” he said. “The critics on the Facebook page? Facebook is a cesspool and I only participate to develop readership.”

For her part, Governor Kelly said, “Mr. Hicks’s decision to publish antisemitic imagery is deeply offensive and he should remove it immediately.”

“While it’s disappointing to see, on July Fourth of all days, I know that Mr. Hicks’s views are not shared by the people of Anderson County nor Kansas as a whole,” she added.

Commenting on the image, the American Jewish Committee tweeted, “This despicable cartoon that compares @GovLauraKelly’s mask order to the murder of six million Jews is highly offensive and trivializes the horrors of the Holocaust. It should be removed immediately.”

Jonathan Greenblatt, CEO of the Anti-Defamation League, said, “To compare COVID-19 rules to the slaughter of millions in the Holocaust is disgusting, wrong, and has no place in our society.”

“We call on the Anderson County Review to rescind this post immediately and apologize,” he added.