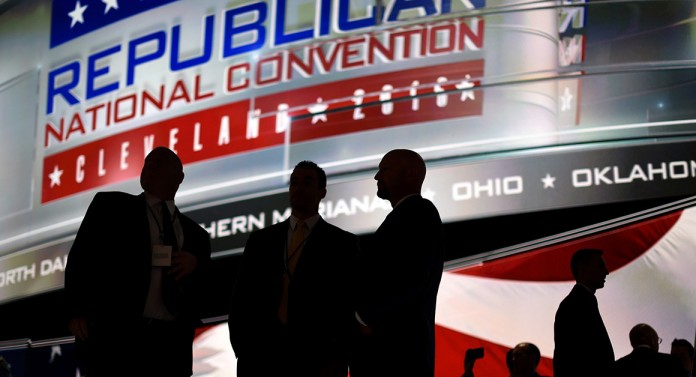 Bedlam erupted at the Republican convention this afternoon as party officials used a procedural maneuver to put an end to the haphazard Never Trump movement, TIME reports.

Rival chants of “shame-shame-shame” and “Trump-Trump-Trump” took over the Quicken Loans Arena shortly after 4 p.m. after efforts to vote down the rules for the quadrennial party convention failed. And while party bosses and pro-Trump delegates quashed the delegate rebellion, designed to air a grab bag of grievances and possibly launch a last-ditch effort to deny Trump the nomination, the ensuing pandemonium put a damper on the opening day of a convention that was supposed to showcase a unified Republican party.

After a marathon session to formulate the party’s rules spelled resounding defeat for anti-Trump and grassroots activists on Thursday, they launched a final stand on the convention floor to push for a roll call on the party rules. A majority of delegates from nine delegations submitted the required signatures to the secretary of the convention, said Rep. Steve Womack of Arkansas, who served as the presiding officer for the vote.

But RNC officials and Trump aides scrambled behind the scenes, pulling delegates off the convention floor to head off a broader and potentially embarrassing show of defiance.

For more than two hours Monday afternoon, senior RNC officials and Trump aides vigorously lobbied delegates who had signed the roll call petition to withdraw their names. After the Utah delegation chairman motioned for a roll call vote, it was ruled out of order because three of the nine delegations no longer had a majority of signatures submitted as a result of the backroom wrangling.

A roll call vote was considered more of a nuisance than a true threat to Trump. But a joint whip operation, which included RNC Chairman Reince Priebus and RNC Chief of Staff Katie Walsh as well as top Trump political aides, wanted to stave off a lengthy rebuke to the party’s rules and its presumptive nominee. Read more at TIME.