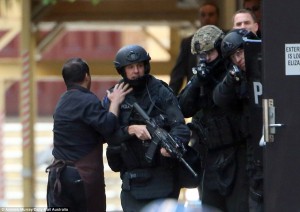 Police firing automatic weapons and lobbing stun grenades stormed the cafe in central Sydney early on Tuesday where a gunman had been holding more than a dozen hostages, bringing a dramatic end to a siege lasting more than 16 hours.

There were reports that two people were killed and at least three others were injured, but this could not immediately be confirmed.

Live television coverage showed at least two people being taken away from the scene on stretchers. One hostage was seen being carried out of the building. She appeared to be in pain, and blood flowed down her legs.

Nine News reported that eleven hostages had been accounted for after the police raid, which occurred shortly after 2am.

A police spokeswoman told Daily Mail Australia that the siege was over, but that no more details would be immediately released.

A scene of pandemonium erupted in the early morning just minutes after hostages started emerging from the cafe. Initially one man emerged with his hands up and lay down on the ground in front of police. Seconds later, a group of of five hostages appeared suddenly after apparently escaping the cafe.

This appeared to be the trigger for tactical police to move in. Within seconds, they had blasted open the cafe door and opened fire with automatic weapons, also hurling what appeared to be stun grenades. The sounds of explosions echoed through the city, and the flashes of rifle fire and the grenades lit up the area.

The gunfight lasted less than two minutes, and more hostages appeared to emerge after the police raid.

As the scene calmed down, a bomb disposal robot was seen entering the cafe.

The dramatic end to the siege came as the gunman holding the remaining captives was revealed as a self-proclaimed Islamic cleric Man Haron Monis.

Monis is a 49-year-old man living in southwest Sydney, but is originally from Iran and a self-proclaimed sheik, and also sent hate mail to the families of Australian dead soldiers between 2007 and 2009, according to The Daily Telegraph.

The seige in the Lindt cafe in Martin Place on Monday follows an unsuccessful attempt to have these charges overturned in the High Court on Friday, The Age reported.

Monis received 300 community service hours and a two-year good behaviour bond for the correspondence, which he claims were his version of sympathy cards, sent with the help from his partner, Amirah Droudis.

Arriving as a refugee in Australia in 1996, the hostage-taker was charged as an accessory to the murder of his ex-wife – who was allegedly stabbed and set on fire on a flight of stairs in her western Sydney apartment block in November 2013.

The man’s current partner was charged with murder but they both received bail as the case was deemed too weak. Read more: The Daily Mail. 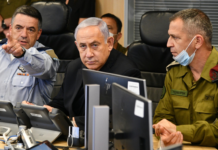 Israel Turned Down Offers Of Ceasefire With Hamas, Netanyahu Says