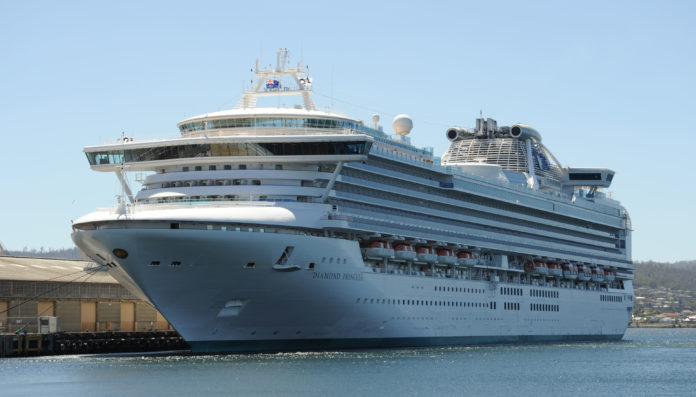 Twenty-eight U.S. residents flown home from the Diamond Princess cruise ship are infected with coronavirus and health officials expect to see more positive cases among the evacuated passengers in coming days, the Centers for Disease Control and Prevention said Friday.

The passengers from the ship, along with three infected people previously returned from Wuhan, China, brings the total number of evacuees with the virus in the U.S. to 31. Another 13 people in the U.S. either picked up the infection by traveling to China or from close contact with a family member who had been in China.

The passengers, who had been quarantined aboard the cruise ship in Japan, are “considered at high risk of infection and we do expect to see additional cases,” Nancy Messonnier, director of the CDC’s National Center for Immunization and Respiratory Diseases, said in a media briefing.

The sharp rise in the number of U.S. patients came on a day of grim news about the spread of covid-19, the viral respiratory disease that has afflicted more than 76,000 people and killed more than 2,200, mainly in China.

The number of cases in South Korea surged to 204, with about two thirds linked to a secretive religious movement with a messianic leader. Iran confirmed 18 cases, including four deaths, centered in Qom, a Shiite holy city south of Tehran. In Beijing, two hospitals were put under quarantine amid fears of a coronavirus outbreak in China’s capital, with one district reporting an “infection density” second only to Wuhan, the epicenter of the epidemic.

Messonier said 18 of the Americans who were quarantined aboard the Diamond Princess in Yokohama harbor had positive results in CDC tests. Ten others were positive in tests conducted by the Japanese. The CDC won’t formally add those people to its count until U.S. tests confirm the findings, but Messonier announced them Friday.

The Japanese government quarantined 3,700 passengers and crew aboard the Diamond Princess for nearly two weeks, a decision that allowed the virus to sweep through the ship, which one Japanese expert has said was plagued by poor infection control. Now, 624 of those on board have tested positive – the second-largest number in any place outside China.

On Monday, the State Department flew 329 U.S. residents home from the ship on two chartered flights. The Washington Post reported Thursday that the evacuation was delayed for hours by a last-minute disagreement among government officials. As the passengers arrived at the airport in buses, test results came back indicating 14 people waiting to evacuate were infected with coronavirus.

CDC officials did not want to put sick people on the plane with uninfected passengers, but they were overruled by the State Department and another top government health official.

At Friday’s briefing, Ian Brownlee, principal deputy assistant secretary in the State Department’s Bureau of Consular Affairs, said the tests for those 14 people were conducted 48 to 72 hours before they boarded the buses, indicating they were infected on the ship.

A plane carrying 129 Canadians and their family members from the Diamond Princess also arrived in Canada Friday.

It’s not clear where all the infected Americans are being treated. Eleven are receiving care at the University of Nebraska Medical Center, five are receiving care at hospitals around Travis Air Force Base near Sacramento, where one plane landed, and two are being treated near Lackland Air Force Base near San Antonio, where the other flight arrived.

Dozens of other Americans from the cruise ship who tested positive were taken off the ship before the evacuation and are still in Japanese hospitals. They include Wayne and Susan Hidalgo of Kansas City, Kansas, who wondered why the ship continued to allow people to mingle freely on board, even after a passenger on board was diagnosed with the virus. One of the people Wayne Hidalgo regularly dined with had shared a bus with the infected passenger.

“As time went on, after a day or so, I wondered, why are we eating dinner with these people? Why is everybody out dancing? Why are they having these shows going on?” the 77-year-old from Kansas City, Kansas said in a telephone interview from his hospital bed in Tokyo.

Japan’s health ministry said 88 Americans on board the ship have been diagnosed with covid-19. Most have been taken to hospitals on land.

The Hidalgos’ children want them brought home, arguing that it’s “not fair” they’ve been left in Japan while other Americans were evacuated. Wayne Hidalgo said he knows the couple can’t leave until they are given the all-clear by Japanese doctors. They each need two consecutive negative tests.

Wayne Hidalgo said he is suffering from mild pneumonia and has been put on oxygen, but had only a fleeting fever. He’s taking antibiotics, but doctors haven’t felt it necessary to put him on anti-viral medication given to the most severely ill patients. Susan Hidalgo has no symptoms.

Wayne Hidalgo said he has become “more and more confident” with the medical care he is receiving as time goes by, and is “totally impressed” with his hospital, his doctor – who speaks fluent English – and nurses who are “wonderful and funny.”

“Susan, my wife, and I have both accepted the fact that we’ve got to stay mentally healthy, and exercise some, and stay here,” he said.

An official from the U.S. Embassy has visited, bringing them clothes and local currency, while Princess Cruises, the cruise line that operates the ship, has been in contact every day.

On Feb. 1, a Diamond Princess passenger from Hong Kong, who left the ship Jan. 25, was diagnosed with the virus. Princess Cruises said it learned about this on social media the following day and reached out to Hong Kong authorities.

On Feb. 3, the captain told passengers the ship would wait in port in Yokohama while Japanese health ministry officials assessed the situation.

But passengers continued to mingle, including at a buffet dinner on Feb. 4. It was only later that they were told to remain in their cabins.

John Haering, 63, from Tooele, Utah, said he came down with a fever that reached 103.6 degrees on Feb. 10, but was not seen by a doctor until 5 p.m. the following day. For two and a half days, his wife, Melanie, put wet cloths on his forehead to keep him cool, replacing them every 20 minutes.

He wasn’t evacuated from the ship to a Tokyo hospital until Feb. 13. His fever had subsided by then. He has been in isolation ever since, with very little human contact. He takes his own temperature, and meals are passed through a stainless-steel cabinet with doors on either side. Once a day, a nurse in full protective gear comes in to clean his room.

He said he has received just one phone call from the U.S. Embassy and no contact with Carnival Corp., the British-American company based in Doral, Florida that owns Princess Cruises.

“I have, as my doctor described it, bad pneumonia. I’m fighting each day to stay positive and healthy,” he said. “I don’t need the uncertainty of what will happen to me weighing on my thoughts.”

In a statement, the U.S. State Department said “the welfare and safety of U.S. citizens abroad” is one of its highest priorities, including providing “all appropriate consular assistance” to U.S. citizens remaining in Japan, and visiting those who have been hospitalized from the Diamond Princess.

But Haering said he needs much more information.

“I’m worried and scared and frustrated with what I have seen and NOT heard so far,” he said in a statement.