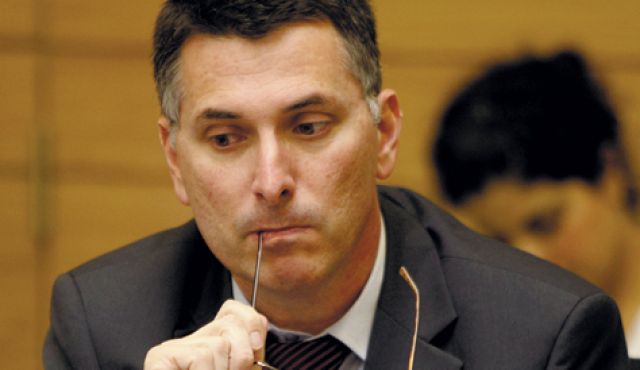 Once a wildly popular minister from the ruling Likud party, Saar, 50, declared a hiatus from political life more than two and a half years ago. He wanted to focus on family and himself, at least for a while, he said, leaving the door open for his return … one day.

But he never really left the political spotlight.

Throughout his break, Saar’s name came up often in political discussions, and public opinion polls suggested he might just have a chance at leading the country in the future.

“When I resigned from government and the Knesset in November 2014, it was clear that I would come back,” Saar told The Washington Post last week. “The question was just when.”

His decision to return came last April, two years after the formation of the current Israeli government of Prime Minister Benjamin Netanyahu. Although there are no elections on the immediate horizon, Saar said he it was time to restart his bid for prime minister.

“I am not in a rush to become prime minister, but I said clearly upon my return that I intend to lead the party and the country in the future,” he said.

Political pundits are also chattering about the fact that he is one half of an Israeli power couple — his wife is one of Israel’s top journalists, Geula Even Saar.

I met with Gideon Saar recently in his Tel Aviv apartment to discuss his ambitions.

This interview has been edited and condensed for space and clarity:

Q: What prompted your return to politics; what have you been doing since you came back?

A: April marked two years since the previous election, and it was clear everyone was starting to think about the next election. Whether it is in 2018 or 2019, at the latest, I would not be considered serious if I came back a few days or weeks before the vote. I wanted to put the things that I thought about over the last two and a half years in front of the public.

I have been working to regain support in my party. I have been received very warmly and with more enthusiasm than before at Likud gatherings. Before my break, I was very popular in Likud. Twice I was voted number one in the party elections. People are very happy I am back and it gives them hope.

Q: Has the Likud party changed since you left two years ago? Is Netanyahu’s leadership more entrenched than ever?

A: Political parties change all the time. Likud’s big change came in 2005 when it split in two and Kadima was formed. Then Likud went from being a center-right party to a purely right-wing party.

Regarding Netanyahu, Likud has a tradition of its leaders serving for long periods of time. Netanyahu has led the party for the past 12 years and there is a tradition in the party of always backing the leader, although people might act differently if they thought the leader had abandoned the party’s path.

Q: Is it a problem that Netanyahu is facing at least four separate police investigations, some carrying criminal charges?

A: I do not think it is not fair to replace someone just because he is under investigation. Israel’s last four prime ministers were also investigated by the police. We don’t know the full picture and I think it is a very premature timing to raise a political voice on the matter.

Q: Where do you stand on the process with the Palestinians that appears to be moving ahead under President Trump?

A: It is a very ambitious goal. Personally, I don’t think we can achieve a final status agreement in the foreseeable future. Trust between the two sides is zero today, so I think it is better to renew negotiations with more modest goals.

Until now, President Trump has been very careful when speaking about the ultimate deal and I think he’s been very clever not to get into the final status issues or make statements about his position or the American position on the issue. This gives him space to maneuver.

Q: What is your idea for a final status agreement? Do you believe there should be two states, one for Israelis and one for the Palestinians?

A: The final status agreement should be an end to the conflict between Israelis and Palestinians.

To achieve that, the conditions must be right. It is not reasonable to think there can be peace with concessions only from Israel; the Palestinians must end their incitement to hatred and violence. They also need a strong leader that can bring them to a historical compromise.

Two-states is a misleading formula and I oppose the idea. The Palestinians already have three states – one in Gaza, an autonomous entity in the West Bank and another state with a Palestinian majority in Jordan.

Even if Israel withdrew to the 1967 lines – which I am opposed to – the Palestinians would not be able to form a viable economic state. It would be too small, have no access, not have control of its borders or airspace. It would not have the rights or ability of a normal state.

I think we need to look at different ideas. The logical solution is to connect the Palestinian entity with Jordan, where most of its population is Palestinian.