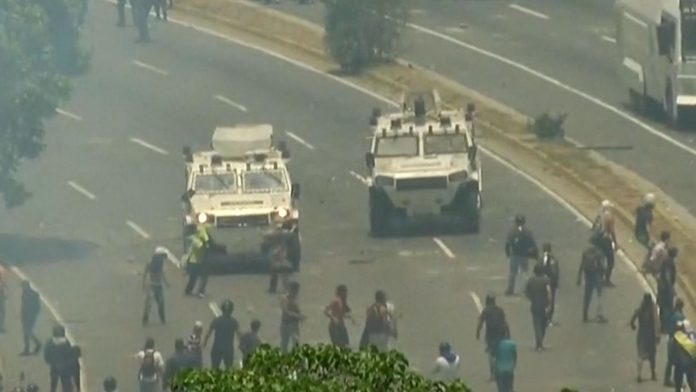 Venezuelan opposition leader Juan Guaidó appeared Tuesday to be staging a military-backed challenge to President Nicolás Maduro, beginning a tumultuous day in the capital, as thousands flocked to the streets and forces loyal to Maduro appeared to violently respond to the demonstrations.

By noon, six people had been wounded by firearms, according to an official with the Caracas Metropolitan Clinic. It was not immediately clear whether they were injured by rubber bullets or bullets. A seventh person, a reporter in the interior state of Barquisimeto, was injured by a rubber bullet, according to Venezuela’s journalists union. In Caracas, an armored vehicle ran into a crowd of Guaidó supporters.

“People of Venezuela, the end of usurpation has arrived,” Guaidó said in a dawn recording at a base in Caracas, urging other soldiers to join the final stage of “Operation Liberty” meant to force the socialist leader from power.

“At this moment, I am with the main military units of our armed forces, starting the final phase of Operation Liberty. People of Venezuela, we will go to the street with the armed forces to continue taking the streets until we consolidate the end of usurpation, which is already irreversible.”

Maduro’s communications minister tweeted that the government was moving to confront a “coup” and was attempting to “deactivate” what he described as a “reduced group of military officials who are traitors” and who have positioned themselves in the Altamira district of the capital.

Outside the La Carlota military base in the Caracas district of Altamira, where Guaidó asked supporters to assemble, people started to join Guaidó’s call to protest and were met by tear gas canisters. It was not immediately clear who fired the tear gas. Troops supporting Guaidó appeared to be wearing blue armbands. Video showed tear gas arcing over a bridge in Caracas congested with protesters and soldiers loyal to Maduro shooting into the sky.

Maduro insisted that the military remains loyal to him.

“Steel nerves,” he wrote in a tweet. “I have talked to commanders in all the regions of the country and they’ve manifested their total loyalty to the People, the Constitution, and the Homeland. I call for maximum popular mobilization to ensure the victory of peace. We will win!”

“The pseudo political leaders that are heading the subversive movement have employed troops and police with war weapons in a street of the city to create terror,” he said.

In a live phone interview on state-run television, chief prosecutor Tarek William Saab said: “Our position is to defend democracy. We will not hesitate to act, without violating the constitution, against the ones who have led an embarrassing show . . . We will act, with all calm, at the right moment.”

Diosdado Cabello, a leading pro-Maduro politician, called on government supporters to gather at Miraflores, the presidential palace, to defend Maduro. “We will be absolutely inflexible, radical in the defense of the Bolivarian revolution,” he vowed on state TV. “That’s why we are mobilized.”

After supporters gathered, Cabello warned: “We are now going to counterattack.”

Guaidó left La Carlota before 10 a.m. and went to nearby Plaza Altamira. Surrounded by soldiers, he led supporters in singing the Venezuelan national anthem. By late morning, around 5,000 people had arrived, some chanting, “Yes, we can,” as more streamed in. About a dozen soldiers were present, wearing blue armbands to show support for Guaidó.

“Today, it’s clear that the Armed forces are with Venezuela and not with the dictator,” Guaidó said at the rally. “The coup is being led by Maduro.”

The morning events set the stage for a potentially dramatic confrontation between Maduro’s government and Guaidó’s backers, culminating weeks of tension in what was once South America’s wealthiest country but that has since been consumed by hyperinflation, rising crime and government malfunction.

Guaidó called for “nonviolent” action, but the video had the hallmarks of perhaps the most significant military challenge to Maduro’s power since Guaidó – the head of the opposition-controlled National Assembly – invoked constitutional powers, called Maduro a usurper and claimed the true mantle of leadership as Venezuela’s interim president. His claim has since been recognized by nearly 60 nations, including the United States, which vigorously backed him on Tuesday and has called on Venezuela’s military to reject Maduro.

U.S. officials expressed support for the opposition in a series of tweets.

“To @jguaido, the National Assembly and all the freedom-loving people of Venezuela who are taking to the streets today in #operacionlibertad – Estamos con ustedes! We are with you!” he wrote, echoing statements also made by Secretary of State Mike Pompeo and national security adviser John Bolton. “America will stand with you until freedom & democracy are restored. Vayan con dios!”

Bolivia and Cuba, whose leftist governments support Maduro, condemned what they called a coup. Russia and China have also backed the leftist president’s government.

NetBlocks, an organization that tracks connection and electricity services in Venezuela, said on Twitter that “multiple internet services” are currently being “restricted.”

At the La Carlota base on Tuesday – a day before a planned opposition protest – Guaidó stood in front of Leopoldo López, his political mentor and a longtime opposition figure who had been placed under house arrest. López reportedly escaped with the help of guards, and his presence at the base signified a defiant break from government authority.

“Venezuela: the final phase for the end of usurpation has arrived, Operation Freedom,” López tweeted. “I have been freed by military men of the constitution, and of President Guaidó. I’m at the La Carlota Base. We have to mobilize. It’s time to conquer freedom. Strength and Faith.”

Guaidó said he would release a list of names of military officials who support him. “We have generals, lieutenants,” he said.

La Carlota – officially, Generalísimo Francisco de Miranda Air Base – was built in 1946 in the eastern part of Caracas. Its airport has been closed to the public since 2005.

Maduro’s communications minister, Jorge Rodríguez, called on Venezuelans “to stay on maximum alert with the glorious Bolivarian armed forces to overcome this coup attempt and preserve the peace.”

Sen. Marco Rubio, R-Fla., who has strongly backed Guaidó, issued a call for the military to rise up: “This is the moment for those military officers in #Venezuela to fulfill their constitutional oath & defend the legitimate interim President @jguaido, in this effort to restore democracy,” he tweeted. “You can write history in the hours & days ahead.”

Eric Farnsworth, vice president of the New York-based Americas Society and Council of the Americas, said Guaidó’s action was a “bold, dramatic effort to force the issue, recapture initiative and require the Maduro regime to act.”

He said that just the fact that López was at large could be a big challenge for the government.

“The regime is afraid of López, which is why they have kept him under arrest,” Farnsworth said. “He is Guaidó’s patron and would be a key figure in a free Venezuela. ‎ Springing him from arrest and engaging directly with the military will present the regime with a real dilemma: Let him remain free in defiance of the regime to rally popular support, or attempt to jail him again, which the people may very well resist.”