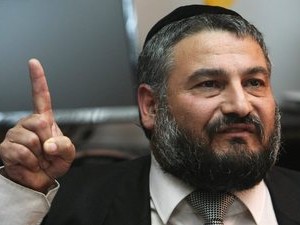 The Israeli Supreme Court chief justices have ruled that no autopsy is necessary for the body of Moshe Refoel Mizrachi z”l, the 4-month-old grandson of Beit Shemesh Mayor Moshe Abutbul (pictured) who passed away ten days after being mishandled by a caregiver.

The Supreme Court ruling followed an earlier ruling by the Yerushalayim Magistrate Court requiring an autopsy, as first reported by Matzav.com. That decision led to various demonstrations in Yerushalayim and elsewhere.

Hundreds had protested in Kikar Shabbos, Yerushalayim, over the original order, leading to at least 11 arrests of chareidim.

Roads were blocked and dumpsters were set on fire on major roads in Yerushalayim.

Moshe Refoel passed away this morning, ten days after being admitted to Hadassah Medical Center in Yerushalayim with a severe head wound.He had suffered cerebral hemorrhage.

The hospital reported the case to authorities, who determined that the baby’s caregiver had violently shaken him in an effort to wake him up.