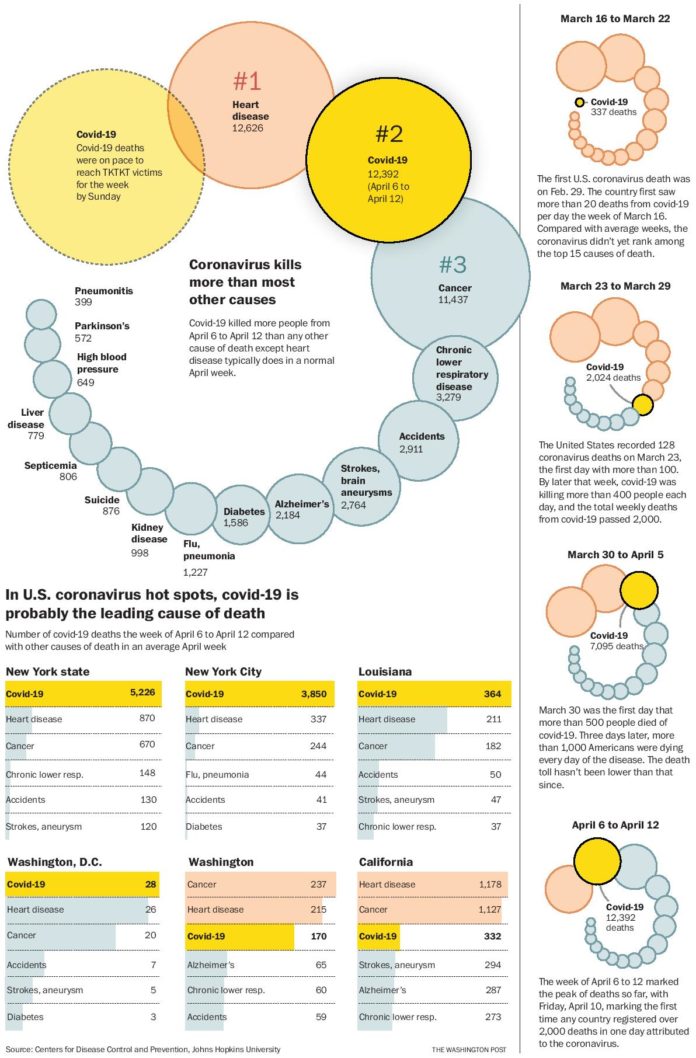 In just weeks, covid-19 deaths have snowballed from a few isolated cases to thousands across the country each day.The U.S. surgeon general had warned that last week would be like Pearl Harbor as he attempted to create context for the threat – but it turned out that more than five times as many Americans died from covid-19 last week than were killed in the World War II raid. You can grasp the scale when you compare a single week’s pandemic deaths with how many people die of major causes in a typical week.

In early and mid-March, when America began widespread closures, quarantines and social distancing, covid-19 caused many fewer deaths than other common causes – fewer in a week than chronic liver disease or high blood pressure, and far fewer than suicide or the common flu. By the end of March, the toll was closer to the average weekly deaths from diabetes and Alzheimer’s disease. Into April, weekly covid-19 deaths climbed past those from accidents and chronic lower respiratory disease. And last week, covid-19 killed more people than normally die of cancer in this country in a week. Only heart disease was likely to kill more people that week.

All of those comparisons include only confirmed cases. This week, New York City said it considered an additional 3,700 people who had passed away over the previous weeks to have died of covid-19, even though there were no lab tests proving it. Those deaths have not been added to official state and national counts, though.Some experts had predicted that the deaths could peak last week, but this week is shaping up to be no better, with new high death tolls Tuesday (2,369) and Wednesday (2,441). Covid-19 is on pace to be the largest single killer of Americans this week, given the normal number of deaths in an April week.

Covid-19 is not killing at the same pace everywhere: In the worst-hit areas, it is killing at an unparalleled rate.The weekly total of covid-19 deaths in New York state and New York City has dwarfed the scale of normal causes of death – explaining why hospitals are struggling to cope. And although the outbreaks in other cities aren’t as bad, Louisiana and the District of Columbia also had more covid-19 deaths than any typical cause of death last week. In places that started social distancing and restrictions on businesses earlier, the deaths per week are lower: Washington state suffered an early burst of the disease, but covid-19 did not kill as many people there last week as in other hot spots.

California has been spared the intensity of many other states. Covid-19 deaths there last week were well below the national rate.

These charts all compare covid-19 deaths with the normal numbers of deaths at this time of year in the country or in each particular state or city, according to the Centers for Disease Control and Prevention. The death counts are averages from that month over the last five years of data. It will take more than a year for epidemiologists and statisticians to calculate the final official toll of covid-19 and put it into perspective. Measured against typical deaths, however, covid-19 is already the greatest killer in many parts of the country.