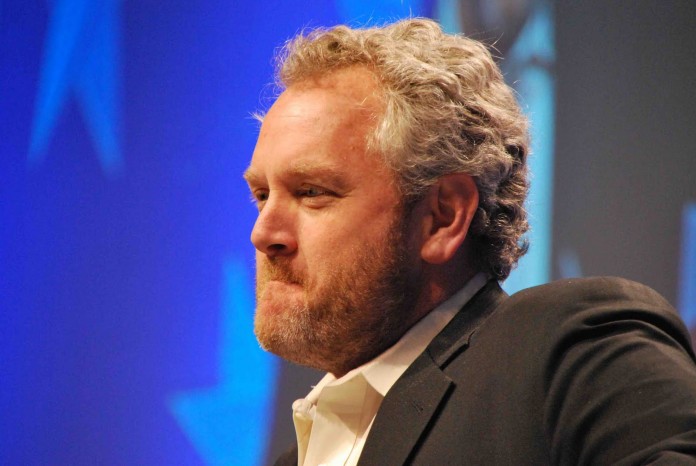 Breitbart News Network likes to think of itself as a “Fight Club” for journalists eager to punch it out with politicians and politicos.

Now its staff is fighting amongst itself.

In the span of six weird and wild days, the popular and often outlandish conservative website has been beset by recriminations and rants, leaks and counter-leaks. The rolling spectacle features one criminal complaint; one video being analyzed with frame-by-frame intensity; one story published (then unpublished) under the fake name of an aggrieved reporter’s father; and six resignations (at least, at last count).

The melodrama has pushed the site, a far-right-wing favorite that often angers mainstream conservatives, into the larger consciousness of the nation and turned it onto the latest flash point in an unpredictable and tumultuous presidential campaign.

The central player in the soap opera, Breitbart reporter Michelle Fields, resigned on Monday, saying in an interview with The Washington Post that she thought the site was more interested in shielding Donald Trump than in supporting her assertion that the Republican front-runner’s campaign manager manhandled her at a campaign event.

“I don’t think they took my side,” Fields said. “They were protecting Trump more than me.”

Fields has become an insta-celebrity of the journalism world after saying that she was roughly grabbed on the arm, bruised and pushed by Trump’s campaign manager, Corey Lewandowski, after a campaign event in Jupiter, Fla., on March 8. What followed was a sequence of events not unlike the presentation of evidence at a trial, and one thing that was very much like that: Fields has filed a criminal complaint.

All the while, Fields has been relying on the eyewitness account of a competitor and battling doubts raised by her own employers. Washington Post reporter Ben Terris was standing nearby when the incident took place, and he has reported that Lewandowski is the person who grabbed Fields.

Transcript of an audiotape obtained by Politico seemed to support Terris and Fields.

Terris: “Yeah he just threw you.”

Fields: “I can’t believe he just did that, that was so hard. Was that Corey?”

After Thursday’s Republican presidential debate, Trump told CNN: “This was, in my opinion, made up. Everybody said nothing happened. Perhaps she made the story up. I think that’s what happened.”

But Breitbart’s coverage was skeptical. The site posted an article questioning that version of events.

“New video of Donald Trump’s press conference Tuesday evening shows that the Washington Post’s account of an altercation involving Breitbart News reporter Michelle Fields could not possibly have happened as Ben Terris reported,” said a piece posted on Breitbart by writer and editor Joel B. Pollak.

The Breitbart story was accompanied by frame-by-frame still images of news footage showing Trump leaving his event in Jupiter trailed by a scrum of reporters – a chaotic scene typical after campaign events.

But, even as it was questioning Terris, the site cast some additional doubt.

“Contrary to what Donald Trump said Thursday evening after the GOP debate, the incident certainly happened. However, the person who made contact with Fields was likely not Trump campaign manager Corey Lewandowski,” the post read.

“I would have liked for them to believe me, believe the eyewitness,” Fields told The Post. “I think they were more concerned about preserving their access to Trump than they were about finding out the truth.”

The day after the Republican debate, the cascade of resignations began.

Kurt Bardella, a former congressional aide who served as the site’s spokesman, quit on Friday.

“I just couldn’t represent them anymore in good conscience,” Bardella said in an interview Monday. “I didn’t sign on to be a member of the de facto Donald Trump super PAC and, in this case, their allegiance to Trump took priority over loyalty to their own reporter.”

Other resignations would follow in the coming days: Fields’, and those of reporters Ben Shapiro, Jordan Schachtel and Jarrett Stepman.

“They’ve largely destroyed their credibility out of idolatry for Donald Trump,” Shapiro said in an interview.

The site, founded by the late Andrew Breitbart (pictured above), is known for its iconoclasm and caustic tone. In the Fields saga, there were more oddities to come – none stranger than the publication on Monday morning of a column attacking Shapiro for resigning.

“Friends of Hamas could not be found for comment.”

It ran under the byline of William Bigelow.

Bigelow, it turns out, is the pseudonym of David Shapiro, the father of Ben Shapiro. The elder Shapiro is a musician and also a writer at Breitbart.

The column was later removed from the site. (Online sleuths recovered a copy.) Nonetheless, David Shapiro has resigned as well.

Breitbart officials said the column, which was penned by Pollak, was meant as a joke and was not intended for publication.

Even as commentators were picking over the details of the controversy, a larger – and still unanswered question – hung over the entire affair: What would be the long-term ramifications for Breitbart? Would it remain a force on the right? And would anyone still want to work there?

A hint at the answer to one of those questions might be found in comments made by the site’s top executive.

“We hire people who are freaks,” publisher Steve Bannon told The Washington Post in an interview earlier this year. “They don’t have social lives. They’re junkies about news and information.”