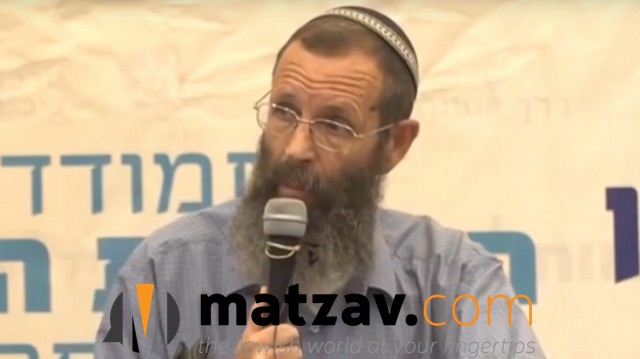 Rabbi Yigal Levenstein, who heads the Bnei David academy in the Israeli town of Eli, made waves several days ago with some public remarks:

I said there are red lines and I am not willing to bring them up for discussion. I said: the Reform movement is not a Jewish movement. (The chief education officer) asked me ‘why?’ I said: ‘It’s a Christian movement. There were many branches that began in Judaism, then left Judaism and became other movements.’

And, regarding those who live a toeivah lifestyle, Rabbi Levenstein commented:

There’s a crazy movement of people who have lost sense of what’s normal in life. This group has whipped the entire country into a frenzy, they force their way into the IDF, and no one dares say anything. There are perverts giving lectures in [the officers’ training school] Bahad 1.

Rabbi Levenstein’s comments drew immediate condemnation from officials in the Israeli government and others in Israeli society, from IDF leaders, to liberal Orthodox rabbis, to the head of the Israeli Reform movement. On the other hand, hundreds of Israeli rabbis came out in support of Rabbi Levenstein, with some expressing occasional disagreement with his choice of words, yet nonetheless defending his basic ideas.

Yeshivat Chovevei Torah Rabbinical School joins the many rabbis, government officials, and institutions in Israel in rejecting the hurtful and unacceptable words of Rabbi Yigal Levenstein of the B’nai David Preparatory Seminary in Eli.  In an act unbecoming of a leader preparing young Jewish men to serve in the IDF, Rabbi Levenstein lashed out both at the LGBT community, calling them perverted, and at the Reform community, which he called a Christian denomination.

From its inception, our Yeshiva has stood for inclusiveness, standing with the State of Israel and Jews everywhere to promote the unity of the Jewish people and the importance of learning from all Jews out of a deep sense of love for our fellow Jews and respect for our mutual covenantal (sic) relationship with God and Torah.  Ahavat yisrael, the commandment to love our fellow Jew, does not come with qualifiers or limitations.

As Israel’s Minister of Education Naftali Bennett wrote, “Jewish law is not meant to be a divisive tool … One cannot denigrate an entire community and take shelter behind Jewish law.”  On the contrary, Israel and the IDF have always been models for the difficult but critical task of unifying Jews of diverse backgrounds and origins, of advocating for respect for different religious beliefs and practices, and of treating people with different sexual orientations with the equality they deserve.

We are heartened by the overwhelming message coming from so many corners of the Jewish world that we will not allow narrow-minded partisans to drive us from our commitment to the Jewish people as an am echad.

It is interesting to read the public statements of Rav Yosef Dov Ha-Levi Soloveitchik zt”l of RIETS about the subjects for which Rabbi Levenstein is being castigated.

Concerning non-Orthodox houses of worship, in regard to their practice of mixed pews:

It would seem to me that our remembrance of history alone should keep us from imitating today the practice of primitive Christianity (which introduced mixed seating for worship – AG) almost 1900 years ago… In my opinion, Orthodoxy must mobilize all its forces and wage an indefatigable battle against the “Christianization” (I have no better word for it) of the synagogue – a practice which is being accomplished by people who have no sense of Halacha and no historical-philosophical concept of the nature of prayer; but they do have the arrogance to wreck principles and traditions which have become hallowed through blood and tears. (Community, Covenant and Commitment, pp. 134-135; The Sanctity of the Synagogue, B. Litvin)

A philosophy of [homo]sexualism is being preached throughout the Western world, to such an extent that a certain rabbi came to me and said, “How can we defend ourselves against it?” I told him, take out a Chumash and read a pasuk. ואת זכר לא תשכב משכבי אשה. (“You shall not lie with a male as with a woman.” -Vayikra 18:22) We are on the defensive, you understand. Why? And the same is true of abortion and so forth.

I can never predict what modern society will come up with. Everything is possible. The most abnormal, obnoxious, repellent ideas may be introduced in the form of legislation to Congress. And now, since it is modern to be liberal, it’s quite in vogue to be heretical, so any law can be adopted. The Supreme Court in America is the most unpredictable body. Did you see, did you read carefully, the decision about abortion?

This is b’nei basar (“children of the flesh”). B’nei basar are oversensitive to beauty, to unredeemed beauty. We ourselves cherish beauty, but redeemed beauty. Unredeemed, vulgar, coarse people. And simply what the b’nei basar preach is non-interference on the part of ethics and morality. This man wants to enjoy life, that’s all. Because actually the pagan way of life rests upon the idea of egocentric hedonism. The latter was declared by the pagans to be morally desirable. In other words, free man is expected to reject any restrictive norm interfering with his hedonic freedom. The permissive society is the pagan society, which heads toward disaster. The permissive society consists of the b’nei basar, the children of the flesh, who are obedient to the flesh and its biological pressures.

The main sin of pagan society consists in its exploiting nature for the sake of man’s enjoyment without the latter accepting responsibility for the very act he enjoyed. In a word, hedonic society, the Dor Ha-Mabul, drove itself and the environment to annihilation. That is exactly what happens to the Western part of the world, the so-called “democratic world” or the “free world”.

What is the motto of modern man? ויראו בני האלהים. Modern man is very mighty… He is a wizard, as far as intellectual achievements are concerned… But the same wizard, a בני אלהים, is a fallen angel… He is tempted by vulgar beauty… ויקחו להם נשים – he surrendered.

The man whose mathematic equations proved to be true 500 million light years from there surrendered to the בנות האדם, to vulgar beauty, to enjoyment. This is no way of life. This was the eser doros me’Adam v’ad Noach (ten generations from Adam to Noach) that were misgalgel (systematically declined) until they reached the bottom… (from 1974 public shiur in Boston, printed here on pp.91-94)

Should Rav Soloveitchik likewise be condemned? His words contain attitudes similar to those expressed by Rabbi Levenstein. Just asking.

Although I am quite removed from the scene, I cannot see myself making the public remarks articulated by Rabbi Levenstein, either using his phraseology or other, more delicate wording, due to public sensitivities and society’s hypercharged atmosphere, which usually render such remarks counterproductive on a pragmatic level. But the essence of Rabbi Levenstein’s remarks, even if expressed more artfully, cannot truly be condemned, and to read condemnation of the essence of his remarks is quite puzzling – no less than would be a condemnation of the Torah itself, in commanding “You shall not lie with a male as with a woman; it is an abomination.” -Vayikra 18:22.

This article first appeared at Cross Currents and is republished on Matzav with the author’s permission.