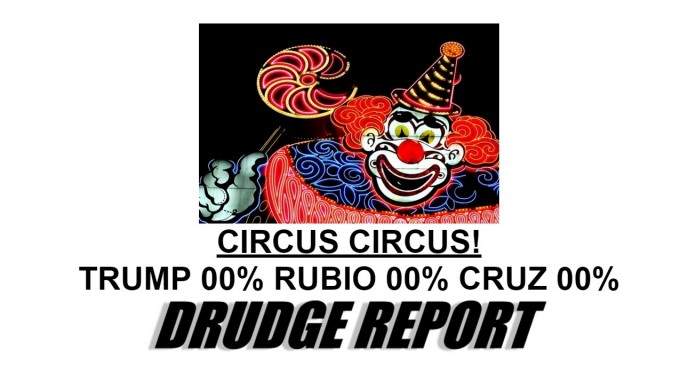 Las Vegas – The top three Republican presidential candidates made a late and vigorous push for support across Nevada as voters headed to caucus locations this evening in a contest expected to be dominated by Donald Trump.

The billionaire mogul has led every recent public poll by double digits. Enormous crowds pack his rallies, including one Monday night in Las Vegas that drew an estimated 8,000 people. Trump’s nationalist call to deport illegal immigrants and wall them off has resonated with Nevada’s working-class whites resentful of the booming Latino population.

But a Trump win is no done deal. The state’s caucuses are peculiar and unpredictable – and Sens. Ted Cruz (Texas) and Marco Rubio (Florida) are laboring to spring a surprise on the businessman.

Cruz was scheduled to hold three rallies across the state Tuesday before attending a caucus site with his wife, Heidi, in Sparks, a suburb of Reno. Rubio held a morning rally in the Las Vegas area before jetting on to afternoon and evening events in Minnesota and Michigan.

Still, Nevada was Trump’s to lose.

Unlike in New Hampshire and South Carolina, which had primaries, voters in Nevada have only a four-hour window – from 5 to 9 p.m. – to caucus at select locations. And unlike in Iowa, which held the first caucuses Feb. 1, there is no time-honored tradition of caucusing here.

In 2012, when Mitt Romney won the Nevada caucuses with 50 percent, just 32,894 Republicans participated – roughly 8 percent of the GOP electorate.

Trump made light of Nevada’s arcane voting rules. “Forget the word ‘caucus,’ ” he said at the rally. “Just go out and vote, okay?” He later said: “What the hell is caucus? Nobody even knows what it means.”

Cruz and Rubio are both eager to claim momentum heading into next week’s delegate bonanza known as Super Tuesday. If the two senators can mobilize their supporters – just 20,000 voters could be enough for a landslide, operatives here say – then a win is within reach.

Both campaigns have carefully tailored strategies to exploit what they see as Trump’s weak state-level organization.

Rubio is targeting Nevada’s well-organized Mormon community, which propelled Romney to victory, as well as seniors who populate the many retirement communities around Las Vegas.

He also is playing up his local roots. He lived briefly as a child in Las Vegas, where his father tended bar at a casino and his mother cleaned rooms at a hotel. During that time, his family temporarily converted to Mormonism.

Cruz, meanwhile, is trying to unite evangelical Christians as well as the self-described liberty voters and constitutional conservatives who made up then-Texas congressman Ron Paul’s coalition in 2012.

Of the top three candidates, Cruz has had the most intense travel schedule in the closing days – especially in rural areas, where he is seizing on a land-use controversy that has been boiling here since rancher Cliven Bundy engaged federal officials in an armed stand-off in 2014.

The federal government controls roughly 85 percent of land in the state, but Cruz vows to turn that power over to the state and private ranchers. He works the Bureau of Land Management into his litany of federal agencies that need to be clipped or abolished. In a just-for-Nevada TV ad, he promises to return “Nevada land” claimed by Washington.

“Eighty-five percent of Nevada is owned by the federal government,” Cruz said before his first post-South Carolina campaign stop, in the libertarian-friendly city of Pahrump. “That makes no sense. That’s ridiculous. That’s an issue on which Donald Trump and I disagree. He says the federal government should continue to own all that land. I think we should send it back to the people.”

At his Monday night rally, Trump said his rival’s commercial on the subject was “a Cruz scam” and acknowledged that he does not know much about the federal lands issue.

“I don’t even know what the hell they’re talking about,” Trump said of the ad. Watching it, he said, “I’m saying to myself, ‘Well, it’s not a subject I know anything about.’ It’s a hell of an ad. This is a Cruz ad. This guy is sick. There’s something wrong with this guy.”

Trump has focused on big rallies in Las Vegas and the Reno area – the state’s two main population centers – but he has a ground organization as well. His state director, Charles Munoz, cut his teeth with Americans for Prosperity, the political activist group funded by the industrial billionaire Koch brothers. Just 26 years old when he was hired in August, Munoz has never run a campaign before and rarely speaks to the media.

Trump’s campaign has bought limited television advertising time in Las Vegas. In its main spot, which also ran in South Carolina, a man whose son was murdered by an undocumented immigrant says that Trump is “the only one” he trusts to secure the border.

Running Cruz’s campaign is Robert Uithoven, who has assigned chairs in all 17 counties and secured the endorsement of Attorney General Adam Laxalt.

When Cruz took the stage for a 30-minute version of his stump speech at a rally Sunday night, his backdrop was a poster showing Nevada mountains and some scrubby trees under the slogan “Return Our Land.”

Cruz’s campaign suffered a distraction Monday as the candidate fired his chief spokesman, Rick Tyler, for tweeting a false news report that accused Rubio of insulting the Bible. Tyler apologized, but Cruz asked for his resignation, eager to take action to turn the page on a narrative pushed by Trump and Rubio that the Cruz campaign employs “dirty tricks.”

Rubio has been campaigning across Nevada with a broader message, trying to appeal to a more diverse cross-section of the electorate. Many of the state’s top elected officials are backing him; Sen. Dean Heller joined the Rubio team Sunday. Gov. Brian Sandoval, who has angered conservatives over a state tax increase, has decided to stay on the sidelines.

Rubio also is attracting some star power. Donnie Wahlberg, a founding member of New Kids on the Block, a boy band popular in the late 1980s and early 1990s, endorsed him at his Sunday night rally.

“I have never, ever voted for a Republican presidential candidate – that is, until this year, thanks to Marco Rubio,” Wahlberg said.

Rubio also has the support of Rick Harrison, a celebrated Las Vegas pawn shop owner and host of the “Pawn Stars” reality-television show. “I really think he’s got a shot at winning on Tuesday,” Harrison told the Sunday night crowd.

Hutchison agreed, saying an upset is possible if the Rubio team can get its supporters to the caucuses.