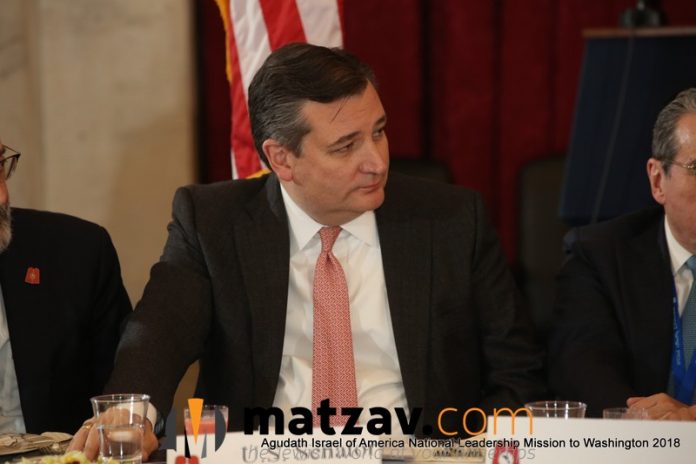 Sen. Ted Cruz (R-Texas) said on Tuesday that European countries’ “slavish devotion” to the 2015 Iran nuclear deal is due to their dislike for the U.S. president.

“Part of their slavish devotion to the Iran deal is that they hate Donald Trump. That’s the irony … you have world leaders who detest President Trump trying to convince him to give up his biggest national security victory as a way they want to say to the world, ‘You see, Obama was right and Trump was wrong,’ ” he said at the Hudson Institute. “And yet, the Deep State in the U.S. is pushing the White House to go that way.”

Cruz slammed the so-called “Deep State” at both the U.S. Treasury and State Department for keeping parts of the nuclear deal, especially the waivers to permit countries part of the nuclear accord to conduct civil nuclear projects with the regime, which the Trump administration extended in August, despite calls from Cruz and others not to do so.

The “Deep State” is a term for the alleged resistance in the bureaucracies of the U.S. government.

Cruz said the Trump administration is “not giving explanations” for these moves.

“It is the Deep State and their objective is keep the deal alive, keep it on life support so it can be switched back on in a Democratic administration,” he said. “At this point, their objective is wait out Donald Trump. They’re convinced he’s leaving in January 2021, and so it’s a waiting game.”

“Unfortunately, both the Treasury Department and the State Department I think have been less than helpful in this regard,” added the senator.

Cruz did not blame Trump for extending the waivers.