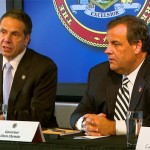 The governors of New York and New Jersey are asking the federal government to pay for half of the cost of a new Hudson River rail tunnel.

In a letter Tuesday to President Barack Obama, New York Gov. Andrew Cuomo and New Jersey Gov. Chris Christie said their states, along with the Port Authority of New York and New Jersey, would cover the rest of the project. It has a price tag of at least $14 billion.

“Everyone knows we need to build a tunnel,” Cuomo told reporters on Tuesday. “My point has been, ‘And who’s going to pay for the tunnel?’ That little detail has been slowing us down.

Cuomo and Christie said their plan is a “realistic, appropriate and fair” approach to a project needed to address delays and congestion in the aging 105-year-old tunnel, which also suffered damage by Superstorm Sandy.

“If the federal government will provide grants to pay for half of the cost of the project, the Port Authority, New York and New Jersey will take responsibility for developing a funding plan for the other half, convening all relevant agencies, and utilizing the proposed federal low-interest loan, local funding sources, and other funding strategies necessary to complement the federal grant commitment,” they said. “This funding framework is comparable to previous structures proposed for a new tunnel.”

Cuomo and Christie said their letter is an attempt to break the “logjam” surrounding funding that has delayed construction for decades.