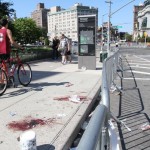 Cuomo said Carey Gabay, 43, was shot in the head and is in critical condition after violence erupted ahead of the massive parade. A 24-year-old made died at the hospital after he was stabbed at about 2 a.m. while two others were shot ahead of the J’Ouvert Festival, which kicked off at 4 a.m. Monday.

Gabay, who was struck in the head by a “random bullet” around 3:40 a.m. while walking with his brother, was “not doing well” as of Monday afternoon, according to Cuomo.

The circumstances surrounding the shooting are unclear, but the governor suggested Gabay was a bystander. Read more at NBC New York.