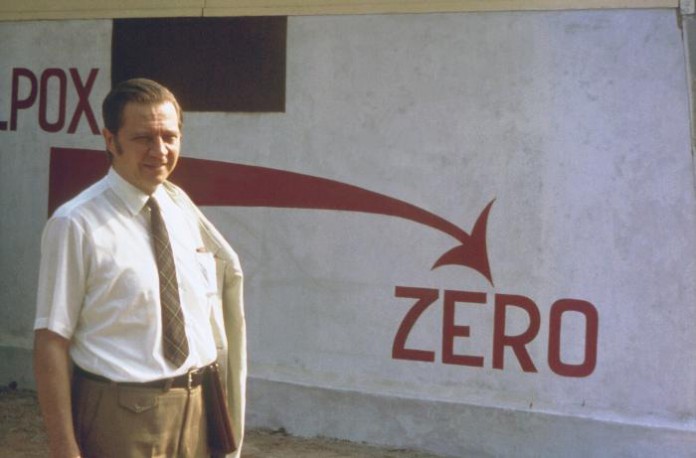 I had called the legendary disease detective for a quick quote.

It was July 2014, and a government scientist cleaning out a laboratory storage room at the National Institutes of Health’s Bethesda, Maryland, campus had stumbled across decades-old vials of smallpox. It marked the first time the lethal virus had been discovered – at least publicly – outside two facilities in Atlanta and Russia, where international agreement allows smallpox samples to be stored.

The horrific disease, which vanished from the United States just after World War II, still killed hundreds of millions of people in the 20th century before it was officially declared eradicated globally in 1980. One U.S. epidemiologist had been especially instrumental in that campaign, and I wanted to hear his thoughts on the troubling discovery at NIH.

D.A. Henderson picked up right away. What I thought would be a five-minute conversation stretched to an hour and a half.

He talked thoughtfully about his view that society should destroy all remaining smallpox samples, given that an effective vaccine exists and that maintaining live samples risks accidental infections or, worse, vials falling into terrorists’ hands. He recalled that during his tenure as dean of the Johns Hopkins Bloomberg School of Public Health, it was nearly impossible to keep tabs on all the specimens that all the quirky researchers kept in laboratory deep freezers. The smallpox discovery at NIH was serious, but he understood how something could get overlooked for decades.

“I used to bring home smallpox in my pocket,” he said merrily. “I would store them in the fridge until I could get them back to the lab.”

Henderson explained that during his years as chief of the World Health Organization’s smallpox eradication unit, he’d go on field visits to places such as India, Bangladesh and African nations. Local health workers often would have samples of suspected smallpox cases – usually scabs from a sick patient – that they wanted to confirm. But they didn’t have adequate labs in the field. So Henderson would slip the samples into his pocket, climb aboard a plane and head back to Geneva carrying one of the world’s deadliest scourges.

“I would bring them home and then stick them in our refrigerator to keep them cool until I could get them to the laboratory,” he said. “My wife was a little bit nervous at the beginning, until I explained to her [that the scabs weren’t particularly contagious], and she still wasn’t happy about having specimens in the refrigerator anyway. But that’s the way it was. … True story.”

Henderson said he wasn’t very worried about getting infected himself. “We were all vaccinated,” he said. “Goodness knows, I got vaccinated repeatedly.”

I was flabbergasted. “Really?” I recall asking. You actually stored smallpox right next to the milk in your fridge?

The next thing I knew, Henderson had put his wife on the line to confirm his story. He and Nana were about to celebrate their 63rd wedding anniversary.

“To tell you the truth, I certainly was startled when I found this [in the refrigerator]. I’m not sure he said anything about it until I asked,” said Nana, a biologist by training. “You get used to it, and it doesn’t seem like anything unusual.”

She recalled that their teenage children got a kick out of the situation and even told friends at school. (“Guess what we have in our refrigerator at home?”) As Nana explained, “They were into this [eradication] project as if it were a family operation.”

Sometimes, she said, she’d wonder if her husband had forgotten about the virus samples. Before defrosting the fridge, she’d always remind him to take them to the lab. She sighed at the memory.

“Those days have gone,” she said. “The only specimens we have now are the kind that grow on cheese and old salami.”

Donald A. Henderson died Friday in Towson, Maryland, at 87. He was a towering figure in the scientific community, perhaps one of the few humans who could claim without exaggeration that his life’s work helped save the lives of legions of people around the world.

I knew him hardly at all. But I’m thankful for the afternoon that I got a glimpse into his absolute dedication to his work, his sharp sense of humor and the good sense he had to marry Nana Henderson.