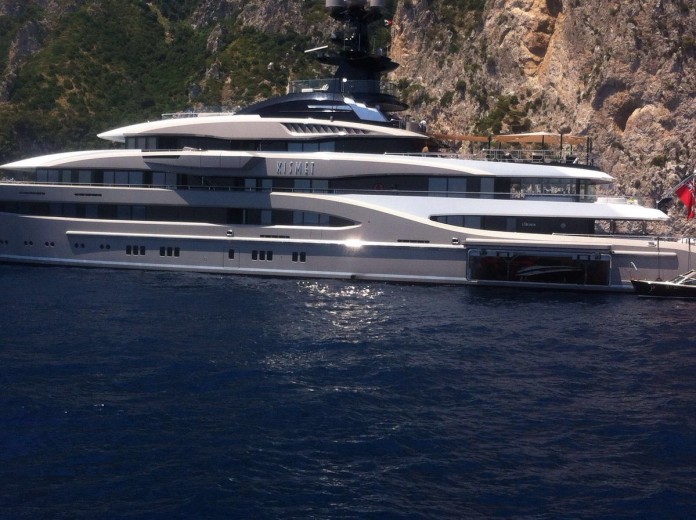 The Jewish owner of the UK’s Chelsea Football Club was pictured reciting Kiddush over a cup of wine on Shabbos afternoon as he coasted along the French Riviera on his super-yacht, the Daily Mail reported.

The “$1.5 billion” yacht was anchored just off the coast of Antibes, France, on Shabbos. Members of the Abramovich family were also aboard the ship, and a day earlier, celebrities were spotted on the boat, as well.

While the Daily Mail claimed that the picture showed Abramovich performing Havdalah, and that the Russian businessman conducted the service “earlier than the usual time of sunset” because of “their latitude,” this is unlikely to be the case.

In the image published by the Daily Mail — in which Abramovich is wearing a yarmulka — a Havdalah candle and spices are nowhere to be seen, and other guests appear to be holding cups of wine, customary during Kiddush, but not Havdalah. Shabbos would not be terminated before sunset due to one’s latitude.

This is not the first time the Daily Mail has botched a reference to Jewish rituals.

In 2011, a story posted on the paper’s website about Abramovich’s preparations for a New Years Eve party featured a picture of the oligarch kindling the candles of a public menorah on the Caribbean island of St. Barts as is customary during Chanukah. The Mail’s caption read: “Joining in: Abramovich was mingling with the locals on the island and even stopped to light some large candles,” failing to mention anything about the festival of Chanukah.

The omission followed a similar slip up earlier that year when the paper published photos of Jared Kushner and Ivanka Trump out and about in New York with their daughter Arabella Rose. In the shots, taken on Sukkos, Kushner is holding a lulav. The Mail referred to the lulav as “flowers” which it suggested might have been a “gift for his wife.”