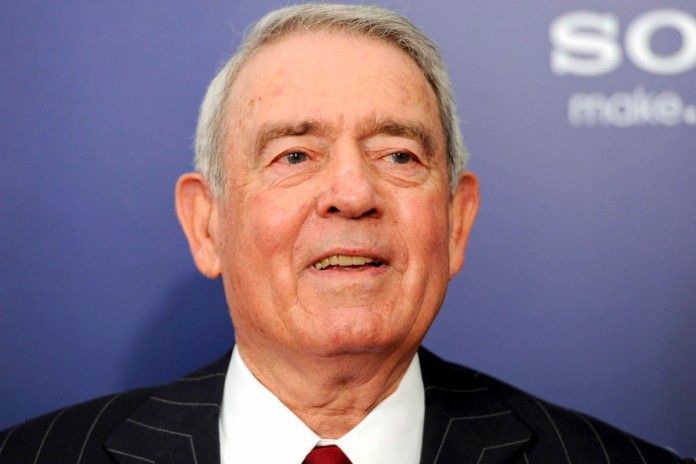 Former CBS News anchor Dan Rather has a newsflash for Donald Trump: “The relationship between the press and the powerful they cover is by its very definition confrontational.”

Writing that he “felt a shudder down [his] spine” during Trump’s latest anti-media tirade, Rather responded Wednesday on Facebook with a seven-paragraph post that was partly a rebuttal to the presumptive Republican presidential nominee’s criticism and partly a pep talk to fellow journalists.

“Attacking the press for unfair coverage has long been a bipartisan pursuit. Sometimes it works. I am happy to say that more often it doesn’t. But Trump’s brand of vituperation is particularly personal and vicious. It carries with it the drumbeats of threatening violence. It cannot be left unanswered.

“This is not about politics or policy. It’s about protecting our most cherished principles. The relationship between the press and the powerful they cover is by its very definition confrontational. That is how the Founding Fathers envisioned it, with noble clauses of protection enshrined in our Constitution.

“Good journalism – the kind that matters – requires reporters who won’t back up, back down, back away or turn around when faced with efforts to intimidate them. It also requires owners and other bosses with guts, who stand by and for their reporters when the heat is on.”

There are some familiar themes in there: the violent overtones of Trump’s rhetoric, the need for journalists to be gutsy, the sanctity of the First Amendment. You’re forgiven for thinking, “I’ve heard it all before.” And some folks – conservatives, in particular – automatically discount anything Rather says because of the flawed report on President George W. Bush’s National Guard service that preceded his resignation.

But Rather’s argument that reporters are supposed to be confrontational is worth paying attention to. Because Trump disagrees. He really seems to think journalists shouldn’t ask tough questions.

The Trump riff that prompted Rather’s Facebook post was about journalists checking up on his claim of a $6 million donation to charities for veterans. This was Trump’s complaint to Sean Hannity on Tuesday night: “It was a horrible experience with the press. I mean, they were questioning it – did he really raise the money? Where is the money?”

To review: Presidential candidate makes claim. Media checks to see whether claim is true. Candidate calls this most basic of processes a “horrible experience.”

What’s more, Trump also seems to think he won’t have any more of these experiences if elected president. Here’s what his spokeswoman, Katrina Pierson, told CNN’s Chris Cuomo on Wednesday when Cuomo asked whether Trump’s media bashing indicates a problem with his temperament.

“Many of the reporters know the facts but choose to write horrible stories about him or portray him in a negative light. And that is not going to happen when Mr. Trump is president because we will have the available resources to put out to the American public where the policies of the past have failed and what we want to do. So it’s not going to get to the point of a temperament question because the people are going to be behind Mr. Trump.”

Got that? Journalists might portray Trump in a negative light now, but that won’t happen when he’s in the White House. His temperament won’t be an issue because the media won’t provoke him.

Here we have a perfect encapsulation of why the Trump-media dynamic is so volatile. The two sides have wildly different expectations.

Journalists generally believe it is their job to hold Trump accountable for the things he says, testing whether his statements hold up. But Trump thinks journalists shouldn’t put him through the “horrible experience” of questioning what he says.

As long as there is such a fundamental disagreement about the function of the press, more friction is sure to follow.