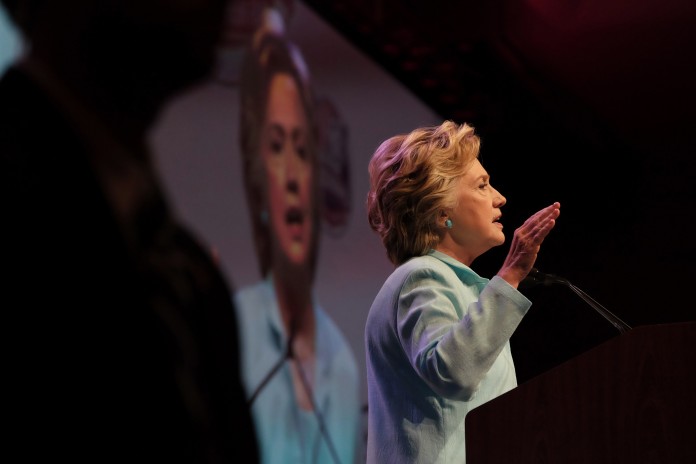 With hours until Election Day, the wildest U.S. presidential race in memory has grown more competitive in most of the battleground states, although Democratic nominee Hillary Clinton continues to hold a broader path to victory than Republican Donald Trump.

The political map suggests that Clinton can lose several key states long assumed to be in her column.

Trump has a new reason for optimism, as a growing number of states appear potentially within his grasp. But to win, he would have to take nearly all of them.

The 11th-hour fluidity of the race had the two campaigns scrambling the travel plans of the candidates and their top surrogates. In Trump’s case, it is an effort to grab what he considers emerging opportunities in the sprint for the finish line; in Clinton’s, as insurance against surprises Tuesday in territory she has considered hers.

Trump said Saturday that he and his running mate, Indiana Gov. Mike Pence, will hold campaign events in Minnesota, a state that has not voted for a Republican since 1972. A Trump campaign official insisted that the move was not a feint, and that internal polling showed the Republican only three points behind Clinton there.

In a sign that Democrats are suddenly anxious about Michigan, on Monday, Clinton will be in Grand Rapids and President Barack Obama will campaign in Ann Arbor. Trump and Pence will also be in Michigan in the next two days.

At a rally today in Tampa, which is a bellwether of crucial Florida, Trump said his campaign is moving aggressively to seize upon openings it sees across the country.

“We’re going into what they used to call Democrat strongholds where we are now tied or leading,” the billionaire real estate developer said.

He predicted that he will win Florida and Pennsylvania – which both voted for Obama in the past two elections – and said that he is “doing phenomenally well in North Carolina,” where both candidates have invested significant time and resources over the past few weeks.

Clinton held a rally in south Florida that was cut short by rain. She was set to hold an event Saturday night in Philadelphia that would feature a performance by pop star Katy Perry, whose song “Roar” is featured in Clinton’s closing ad running in 11 battleground states. Beyoncé and Jay Z headlined a concert for Clinton on Friday night in Cleveland.

Also on the line Tuesday is control of the Senate, where Republicans are defending 24 seats, compared with 10 for the Democrats. Trump’s performance at the top of the ticket could determine whether Democrats pick up the five seats they need to regain the majority – or four, if Clinton wins and her vice president, Tim Kaine, has a tiebreaking vote.

“The tightening of the race in many of these battleground states is providing a little bit of lift to our Senate races, and in some of these cases, it is going to be decisive,” said Steven Law, president of the Senate Leadership Fund, a Republican super PAC aligned with Senate Majority Leader Mitch McConnell, R-Kentucky.

“I think we’re really on the razor’s edge,” Law said of his party’s prospects of holding the Senate. “Trump’s final position in all of this is uncertain. I don’t think he’s close enough to the pin yet to lift most of these races into the win column.”

On Thursday, the Cook Political Report predicted that Democrats will pick up four to six Senate seats, enough to gain control if Clinton is elected, but less than its earlier forecast of a five- to seven-seat gain.

Republicans also are bracing to lose seats in the House, which would diminish the largest majority they have held there since 1928. Neither side, however, expects a wave large enough to restore control to Democrats, who lost it in the 2010 midterm elections.

Clinton began the final weekend of campaigning with a narrow lead over Trump in the ongoing Washington Post-ABC News tracking poll. Through Thursday night, the rolling survey showed Clinton at 47 percent and Trump at 43 percent among likely voters. Libertarian Party nominee Gary Johnson was at 4 percent and Green Party nominee Jill Stein was at 2 percent.

That’s the largest margin between the two major-party candidates this past week – and a sign that Clinton may be starting to recover from a fresh round of attention to her use of a private email account and server while she was secretary of state.

Clinton’s decision to ignore a directive that official business be conducted where possible on a government email account has dogged her since it became public last year. It reinforced the public’s long-standing doubts about her honesty and judgment, and sparked an FBI investigation of whether national security might have been compromised.

Before that development, Clinton appeared in control of enough states to put her well over the 270 electoral-vote mark. The tightening of the polls since then has left enough states in doubt this weekend to force a modification of those earlier predictions.

A quartet of battlegrounds have dominated the Clinton campaign’s calculation throughout the fall campaign: Florida, North Carolina, Ohio and Pennsylvania. Obama won those four in 2008 and all of them but North Carolina in 2012.

Until recently, it appeared that Trump needed to sweep all four to overcome Clinton’s and the Democrats’ electoral-map advantage. But as the race has tightened, Ohio seems to have moved into the Republican column, and other states outside those four have potentially come into play.

The GOP nominee is looking to states including Michigan, New Hampshire and Wisconsin to make up a potential deficit, should he not win Florida, North Carolina and Pennsylvania.

One force that is factoring into both sides’ assessments is that more and more Americans are voting before Election Day, either by mail or in person.

Upward of 37 million voters have already cast ballots. In key states such as Colorado, Florida, Nevada and North Carolina, it is likely that well over half the electorate will have done so before Tuesday.

Although those votes have not yet been counted, strategists from both parties are poring over the data about who has voted and to get a preview of the contours of the 2016 electorate. The figures also give them a sense of possible trouble spots.

In past years, more Democrats have participated in early voting, while Republicans have been more likely to wait until Election Day to vote.

This year, however, it appears as though Republicans are closing the early-voting gap in many key states. But it is not clear whether this reflects greater enthusiasm and better organization on their part, or just a shift in the behavior of people who would have shown up anyway on Tuesday.

Polling and early-voting data suggest a number of electoral cross currents as the race heads into its final two days.

Clinton has struggled to reassemble some version of the coalition that twice elected Obama, the combination of African Americans, Hispanics, single women and young voters.

Hispanic turnout appears strong, based on early-voting data. That is a major reason Democrats think Nevada will be an easy win for Clinton, although the polls are close and Trump scheduled a stop there Saturday.

Clinton also has a double-digit advantage among female voters, who in 2012 accounted for 53 percent of the electorate.

“If this is actually true, Trump’s done,” GOP pollster Christine Matthews said. “He’s not going to be able to win men by a big enough margin to overcome a 15-point disadvantage with women.”

But the Clinton campaign is worried about turnout among African Americans. The Democratic nominee and her top surrogates have made repeated visits to major cities in an effort to stoke enthusiasm among those voters, and she will end her campaign with a big rally in Philadelphia.

“Based on early vote returns, we know that strong get-out-the-vote efforts in the African American communities in Pennsylvania, Michigan, Florida and North Carolina will be needed to win on Tuesday,” AFL-CIO political director Michael Podhorzer said.

This has been a central dynamic of the campaign and Clinton campaign officials view it as a potentially decisive factor in an electoral map that has shifted since the last election.

Democrats remain skeptical that Trump, who boasts of his ability to bring new Republican voters to the polls, can crack what in recent cycles has been a “blue wall” in the upper Midwest.

“Trump is making a last bet on white, non-college-educated men in Pennsylvania, Michigan and Wisconsin,” Podhorzer said. “That’s been tried by Republican candidates before, and it hasn’t worked.”