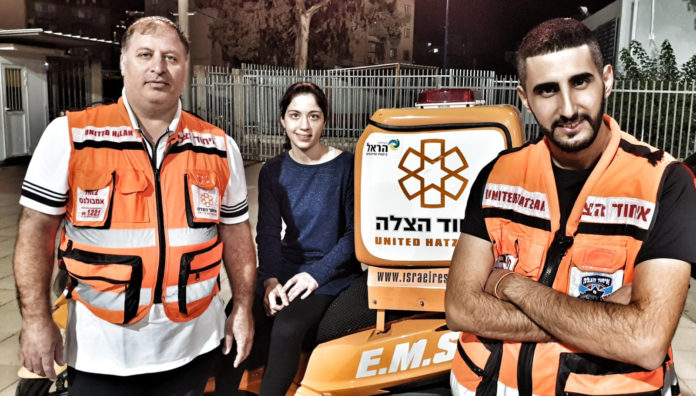 Two years ago, Hila Zohar, aged 17 at the time, fell off of the roof of her home in Or Yehuda after she suffered a seizure. The fall, more than 8 meters, caused a serious head injury, massive bleeding and complete loss of consciousness. United Hatzalah volunteer EMT Avi Yosefov, who lives in the same neighborhood, received the emergency alert, rushed over to the scene and arrived in less than a minute. Yosefov treated her for her injuries and his near-immediate response and treatment saved her life.

Hilah’s father, Yaakov Zohar, witnessed the terrible incident and saw how fast Avi arrived and treated his daughter. At that very moment, Yaakov decided that he too would become a volunteer EMT. On Tuesday night, Yaakov, together with 15 other new EMTs graduated their training course and became United Hatzalah volunteers.

“I recall very clearly how Avi arrived with incredible speed and fought hard to save my daughter’s life,” recounted Yaakov. “Hila was brought to Tel HaShomer Hospital and was in the intensive care unit for two weeks. After that, she underwent months of arduous rehabilitation. When she had recovered enough and was finally out of danger, I slowly began to understand what exactly had happened and the desire to become a part of United Hatzalah awoke inside me.”

Yaakov, an electrician by profession, underwent the admissions process to participate in a training course and two days ago, came full circle by graduating the course with honors. He will now join the team of volunteers serving the area of Bika’at Ono under the guidance of Yuval Shlafman, United Hatzalah’s Chapter Head of the region. Shlafman, upon presenting Yaakov with the award of excellence in the course said: “I believe that Yaakov’s personal story will push him to become an excellent EMT with a high level of motivation that will help him continually assist others in their times of need.”

Avi Yosefov attended the graduation in order to honor Yaakov’s accomplishment and recall the traumatic incident that brought them together. “We are neighbors and live right down the street from one another. However, until the incident with Hila, we did not know each other very well, just enough to say hello when passing in the street. When the incident occurred, I was at home. When I saw the address of the call I knew that it was my neighbor. I raced outside, ran down the street, and in just a few seconds I was treating Hila. After everything calmed down, we stayed in touch and about a year-and-a-half ago, Yaakov told me that he too wanted to volunteer for the organization. Watching him graduate today with honors brought me a lot of joy.”

Hila is now 19-years-old and healthy. “First of all, I want to thank United Hatzalah and Avi, for without them, I wouldn’t be alive today. I am also very proud of my father who has decided to volunteer and become a part of the organization so that he can now save others just as I was saved.”