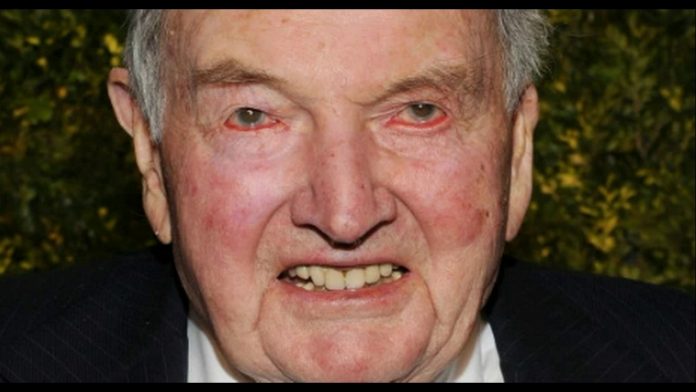 David Rockefeller Sr., the heir to a vast and storied family fortune who, as president, chairman and chief executive of Chase Manhattan Bank, transformed a listless business into one of the world’s largest financial institutions, died March 20 at his home in Pocantico Hills, New York. He was 101.

A spokesman, Fraser Seitel, said the cause was congestive heart failure.

Rockefeller was the last surviving grandchild of oil baron John D. Rockefeller, who became one of the richest men in the world by the time he died in 1937. The younger Rockefeller’s four brothers, John III, Nelson, Laurance and Winthrop, carved prominent careers in philanthropy, politics, conservation and politics, respectively.

David Rockefeller became a banking stalwart. He was a globe-trotting financial diplomat and twice declined President Richard Nixon’s offer to become secretary of the treasury because he felt his position at Chase gave him more influence. In 1979, he used his contacts at the highest levels of government to bring the ailing and deposed shah of Iran to the United States for medical treatment.

Rockefeller was a celebrated philanthropist. He donated millions of dollars to the Museum of Modern Art, his alma mater Harvard and the Council on Foreign Relations, where he served as chairman from 1970 to 1985. He turned his family-sponsored medical research center into Rockefeller University in New York.

In 1998, President Bill Clinton awarded Rockefeller the Presidential Medal of Freedom, the nation’s highest civilian honor, for co-founding the International Executive Service Corps, a volunteer organization that since 1964 has sent American business executives to developing countries to provide management expertise.

Rockefeller was most remembered for his influential role in banking.

When Rockefeller arrived at Chase in 1946, New York law restricted the bank’s business to the city. Using family connections – particularly his brother Nelson, a Republican who was then governor of New York – he got the restrictive laws overturned in 1960.

Chase expanded into Westchester and Nassau counties. Eventually, the bank’s reach extended across Europe, Latin America and Asia. The bank made loans to Panamanian ranchers, financed bowling alleys in Europe and backed a bus line in the Virgin Islands. By the early 1960s, it had become the second-largest bank in the country.

When Rockefeller first joined Chase, the bank handled wealthy clients, banks and corporations and snubbed deposits smaller than $5,000. It was largely mismanaged, lacked a budget and had no formal organization chart or comprehensive business plan.

Rockefeller became the bank’s president in 1961 and, among many modernization efforts, set out to attract a diverse clientele, implementing the slogan “You have a friend at Chase Manhattan.”

But by the mid-1970s, the bank had lost ground in the industry. When Rockefeller became chairman in 1969, Chase was about even with massive Citicorp in assets and deposits. By aggressively targeting retail customers and foreign clients, Citi overtook Chase in three years.

During his 12-year reign as chairman, Rockefeller was often accused of being an absentee leader. He took 78 trips abroad. Although many of those trips were associated with business, critics said he was gone too much to redress the bank’s problems.

“If there was one defect of his leadership of the Chase, it’s that he had no many other strong interests that he couldn’t focus all his attention on the bank,” said New York University financial historian Richard Sylla.

In 1976, $1.9 billion of loans the bank made went sour, including $50 million lost when the department store W.T. Grant declared bankruptcy. “A large part of the bank’s liabilities stems from Rockefeller’s high-minded conviction that the Chase should be a good corporate citizen,” Time magazine reported in 1976.

When New York City verged on bankruptcy in 1975, Chase bought more than $400 million of city bonds and notes, which helped the city but hurt the bank’s bottom line.

Chase also invested more than $730 million in real estate investment trusts, an investment vehicle Rockefeller often used to reduce corporate income taxes. When real estate values plummeted in the 1970s, nearly three-quarters of the bank’s real estate holdings produced no income. By the time he retired in 1981, the bank had fallen from the third-largest in the world to 89th.

David Rockefeller, the youngest of six children, was born in Manhattan on June 12, 1915. His mother, Abby, was a founder of the Museum of Modern Art. His father, John D. Rockefeller Jr., was emotionally distant, high strung and tormented by his inherited wealth, but he drove into his children a sense of noblesse oblige and a commitment to hard work.

Young David, who grew up in the largest private residence in New York City, was required to do chores. At 7, he spent eight hours a day raking leaves on the family’s 3,400 acre estate in Westchester County. In Maine, where the family owned a summer home, he pulled weeds by hand, earning a penny a weed.

One summer in Maine, he took a natural history course and developed a passion for beetles. On warm nights, he would hang a bedsheet outside his bedroom and set a light in front of it. Soon, the sheet would be crawling with insects. He would eventually collect more than 40,000 specimens.

As a boy, his parents often entertained artists, foreign leaders, adventurers and politicians, and young David moved seamlessly among them. One Antarctic explorer-cum-family acquaintance named a relay camp after him. “That was an exciting thing for a thirteen-year-old boy,” Rockefeller wrote in his 2002 autobiography, “Memoirs.”

He graduated from Harvard in 1936, then spent a year at the London School of Economics and received a PhD from the University of Chicago (co-founded by his grandfather) in 1940.

After his dissertation was complete, he married Peggy McGrath. She lived in Mount Kisco, an affluent Westchester County village 20 minutes from the Rockefeller estate. They knew each other growing up, and he began courting her while pursuing his doctorate. She possessed charm and a biting wit, “which nicely complements her husband’s habitual blandness in manner,” the New Yorker magazine commented in 1965.

She died in 1996, and their son Richard Rockefeller died in a plane crash in 2014. Survivors include five children, David Rockefeller Jr. and Peggy Dulany, both of New York, Abby Rockefeller and Neva Goodwin, both of Cambridge, Massachusetts, and Eileen Growald of Shelburne, Vermont; 10 grandchildren; and 10 great-grandchildren.

During World War II, Rockefeller joined the Army as an enlisted soldier, but he could not bear sharing assigned quarters with a malodorous horse keeper. “I couldn’t breathe,” he told Time magazine. He applied for officer’s training. Fluent in French, he was given intelligence work in North Africa. After Paris was liberated, he worked at the re-established U.S. Embassy, reporting on French economic and political developments.

After the war, Rockefeller joined Chase National Bank because his uncle was its chairman and the family had a 5 percent stake in the company. In 1955, Chase merged with the Bank of the Manhattan Co., creating Chase Manhattan.

Rockefeller was a compulsive worker. Typical was a day in his prime when he spent eight hours at the office hosting a reception for 25 ambassadors, then went to an event at one of his charities and a midnight session at the Rockefeller Institute. He was at work by 9 a.m. the next morning. Even into his 80s, he would rise at 5 a.m. and attend 10 straight meetings over 10 hours.

A master networker, he long maintained a storied Rolodex, a metal cabinet with a 4 foot-by-5 foot Ferris wheel with more than 150,000 names – almost everyone he had met since World War II.

Often, his massive Rolodex helped raise money for his causes. Once, he contacted a telecommunications mogul who donated $5 million to the Museum of Modern Art, on whose board Rockefeller sat. In 2005, Rockefeller pledged $100 million to the museum’s endowment, to be received after his death.

Early in the 1970s, Rockefeller founded the Trilateral Commission, a networking group of influential private-sector leaders. The commission incurred the wrath of reactionary and radical conspiracy theorists who alternately contended the commission was a Marxist front, an arm for a corporatist takeover of the world or intent on installing global government.

Rockefeller was on intimate terms with many world leaders. One of these relationships had a lasting effect on U.S. foreign relations.

In 1979, Mohammad Reza Pahlavi, the shah of Iran, was overthrown. For nearly a year, the exiled ruler sought medical treatment for cancer. Rockefeller, a business acquaintance of 20 years, helped secure medical treatment in Mexico City.

After the shah’s health deteriorated, his twin sister approached Rockefeller and asked for help. Believing the United States should stand by a longtime ally, Rockefeller helped convince President Jimmy Carter to grant the shah entry into the country to get medical treatment in New York City.

In Iran, public reaction was vitriolic. Thirteen days after the shah’s arrival, militant students overran the U.S. Embassy in Tehran and held 52 American hostages for 444 days.

Rockefeller was long associated with New York City and contributed to its iconic skyline. By moving Chase’s headquarters to downtown Manhattan, he rejuvenated the world’s financial heart.

For years, companies once headquartered near Wall Street had migrated to midtown. Chase’s move downtown in the early 1960s launched a building boom in Lower Manhattan, leading to the construction of the World Trade Center in the 1960s and ’70s.

According to one story, when he heard the World Trade Center would block the view from his building’s top floor, he called his brother Nelson, the governor. “Can’t you just move it over a few feet?” he asked.

Rockefeller maintained his view of the Statue of Liberty and the Hudson River.

Leave a Reply to 5 th yr in Kollel Cancel reply