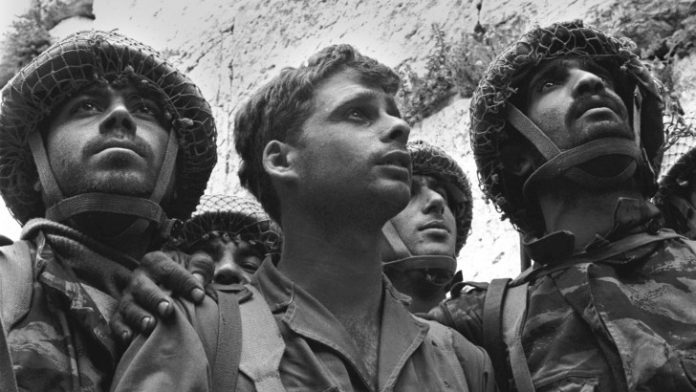 David Rubinger, a photojournalist whose image of Israeli paratroopers at the freshly captured Kosel Hamaarovi in 1967 came to represent, for many of his countrymen, the spirit of modern Israel, died March 2 in Yerushalayim. He was 92.

His death was reported by the Agence France-Presse. No other details were immediately available, but Israeli President Reuven Rivlin eulogized Rubinger in a statement: “There are those who write the pages of history, and there are those who illustrate them through their camera’s lens. Through his photography, David eternalized history as it will be forever etched in our memories.”

Born to a Jewish family in Vienna, Rubinger fled to what was then the British mandate of Palestine in 1939, the year after Nazi Germany annexed Austria in the event known as the Anschluss.

He went on to document nearly seven decades of Israeli history, from the founding of the Jewish state in 1948, through wars and peace accords, to the modern day. Shimon Peres, the late Israeli statesman and prime minister, once wrote that Rubinger was “the photographer of the nation in the making.”

Rubinger began his career with Israel publications but was best known for his photography published over five decades in Time magazine, where he was chief Middle East photographer.

Trusted among the country’s political establishment, he photographed Israel’s prime ministers in moments of private poignancy. In one picture, he showed Golda Meir lovingly feeding her grandson; in another, he caught Menachem Begin helping his wife, Aliza, put on her shoes.

Rubinger distinguished himself particularly for his wartime work, photographing young men on the battlefield and the leaders who sent them there. He could be seen amid soldiers, a camera in his hands, guns in theirs.

“The Israel that photographer David Rubinger shows us is not quite the proud and feisty nation-state we think we know. It is a drier, harder, stonier, less promising land. Many of its people look dusty and weary and its leaders often appear bewildered. Its warriors seem vulnerable even in victory,” journalist Hank Burchard wrote in his Washington Post review of a 1990 exhibition of Rubinger’s work at the B’nai B’rith Klutznick Museum. He “takes photographs that are not so much well-timed as timeless.”

Rubinger’s most famous image dated to the 1967 war, also known as the Six-Day War. In that conflict – a momentous Israeli victory – Israel took territories including the Gaza Strip, the Golan Heights, the West Bank and East Jerusalem from Arab neighbors.

“When I got to Jerusalem, I heard gunshots, so I ran to the Western Wall, maybe 20 minutes after it was taken,” Rubinger told Haaretz. “I laid down on the ground and these three soldiers just passed by. I didn’t think much of the photo at the time.”

“Part of the face is cut off one the right [side],” he said, “and on the left there’s only half a face. . . . Photographically speaking, this isn’t a good photo.”

And yet, the photograph encapsulated the fatigue, exultation, hope and perhaps lingering trepidation of the soldiers and the nation they represented. Distributed by the Israeli government, the photograph became one of the most recognizable images of its era – an Israeli version, it has been noted, of American photographer Joe Rosenthal’s picture of U.S. servicemen lifting the Stars and Stripes at Iwo Jima in 1945.

Rubinger was born in Vienna in June 1924, with the birth name of Dietrich, the Times of Israel reported, His father, who sold scrap metal, was briefly interned in concentration camps before being released. His mother died in the Holocaust.

During World War II, Rubinger served in Europe with the Jewish Brigade Group of the British army. A friend in France gave him his first camera.

After the state of Israel was created, Rubinger said, “I laid down my gun and took up the camera.” He began his journalism career in the 1950s with the Israeli publications Haolam Hazeh and Yediot Achronot. He attracted notice outside Israel with the publication of his work in Life and then Time magazines.

Shortly after World War II, Rubinger married a cousin in Europe, Anni Reisler, who had survived the Holocaust. The marriage – an effort to help bring her to Palestine – lasted 54 years before her death in 2000. They had a daughter, Tamar, and a son, Ami, and several grandchildren and great-grandchildren.

Rubinger spent a period as picture editor at the Jerusalem Post and as official photographer of the Knesset, the Israeli parliament. In 1997, he received the Israel Prize, his nation’s most prestigious honor. He was the author, with Ruth Corman, of “Israel Through My Lens: Sixty Years As a Photojournalist” (2007).

Rubinger’s image of the paratroopers at the Western Wall found wide circulation in Israel, where, over his strenuous objections, it was used at times in political materials and even a cigarette advertisement. He ruefully acknowledged, however, that such uses had helped the image attain its renown.