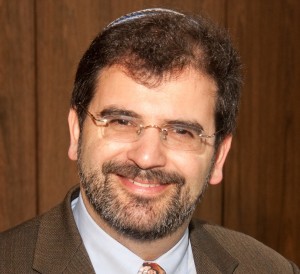 Exclusive: The day after the Moetzes Gedolei HaTorah of America, Agudath Israel of America’s highest rabbinic body, issued a strong statement proclaiming that “Open Orthodoxy” is beyond the pale of Orthodoxy, the president of Yeshivat Chovevei Torah, Open Orthodoxy’s flagship school, essentially mocked it.

Rabbi Asher Lopatin was writing after having been invited to, and attending, the Agudath Israel Legislative Breakfast this morning, where, he says, he “was warmly received.”

“It allowed me to put some recent statements by Agudath Israel and the Rabbinical Council of America in the context of our own commitment to unity and respectful dialogue in the Jewish and Orthodox community,” wrote Lopatin. 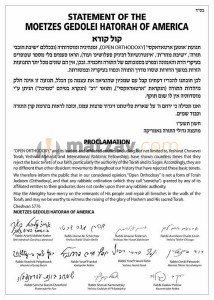 Lopatin goes on to say that Yeshivat Chovevei Torah Rabbinical School “has always stood for creating an inclusive, welcoming, open community, where passionate Jews can, and should, disagree, but should never seek to impose their own ideas on others. Our goal should be to empower each other to be the best Jews and human beings we can be.”

Lopatin, in response to the Agudah event, mocked the very essence of the Moetzes statement, which makes clear that Open Orthodoxy must be roundly rejected and the group’s inroads in the Torah community is not to be tolerated.

“After attending this morning’s Agudah breakfast, where Jews and non-Jews talked about acting together, in a unified way, to achieve mutual goals,” Lopatin wrote, “I feel even greater resolve  to redouble our efforts to enable our graduates, and the men and women who graduate from so many other Orthodox learning institutions, to continue to build an Orthodox community which brings us together rather than divides us. I am confident that as we reach a total of more than a 100 musmakhim this year, YCT can help lead the way.”

Lopatin’s last statement, again, completely ignores the Moetzes proclamation and may be viewed as tantamount to a mocking of the historic statement issued yesterday.

To top it off, Lopatin, concluding his post-Agudah event remarks, encouraged people to read statements from JOFA and the International Rabbinic Fellowship, “both of which support learning and leadership – for women and men – in the Orthodox Community, a core value of YCT’s.” He adds that people should “feel free to sign the petition regarding supporting women in Orthodox leadership roles.”

Lopatin’s remarks today are disingenuous, as he and his institutions promote values that undermine the Torah in so many ways. Unity is not the issue; tolerance and promoting ideals that contravene the Torah come first. Lopatin and other leaders of Open Orthodoxy often invoke unity and love in order to evade criticism of the numerous infractions of their movement.