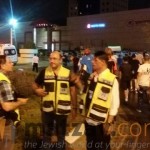 A day after the deadly terror attack in Be’er Sheva, in which an IDF soldier was murdered, Ynet’s hidden camera has revealed the ease with which weapons can be smuggled into crowded public places.

Ynet reporter Ran Boker managed to walk into the site of Sunday night’s attack in Be’er Sheva’s central bus terminal on Monday morning with a knife in his sock.

Dozens of security guards stood near the location of the bloody scene, where Eritrean citizen Haptom Zerhom was killed by a lynch mob, but not one of them stopped our reporter, who walked around the station for an hour with a knife in his hand. A guard checked his bag at the entrance, but he was not asked to go through a metal detector.

Another security lapse was also revealed at PetaCh Tikva’s mall, less than two weeks after an Israeli man was stabbed by a Palestinian attacker near its entrance.

Security has been beefed up since the attack, but Ynet’s reporter managed to walk in and out of the mall several times with a fake gun, without raising the suspicion of the three guards who stood at the entrance, while one of the entrances to the mall was completely unguarded.

Ynet later managed to enter the Petach Tikva central bus terminal with the fake gun hidden inside a cardboard box filled with wires and metal objects, which were meant to set off the metal detector. The guard at the entrance to the station asked us if we were carrying a weapon, did a quick search of the bag in our possession, and let us pass on through. The metal detector did not go off.

Peri Atias, CEO of Netzba Holdings, which owns the Be’er Sheva central bus terminal, said in response, “We act according to the Israel Police’s security protocols. The examination process and scope are guided by the Israeli police, as is true for all facilities in Israel.”

The Petach Tikva mall said in response, “The mall acts according to Israel Police guidelines.”