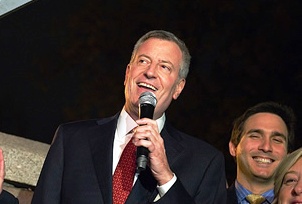 NYC Mayor de Blasio used one of the city’s gleaming cultural icons for “cheap propaganda” Wednesday — promising an NYPD photo exhibit at the Brooklyn Museum that turned out to be nothing more than a self-promotional stunt, critics griped, the NEW YORK POST reports.

In fact, the “exhibit,” contrasting New York’s bad old days with the safer, cleaner Big Apple of today, was quickly dismantled by City Hall staffers after a related discussion on record-low crime statistics and a Q&A with reporters. No member of the public at large ever got to see it.

“I urge everyone to really look at it because it reminds us of all of the work that went into changing things,” de Blasio said at the press conference, hailing the display as “powerful” and “wonderful” — even as workers were working feverishly to remove the photos before the museum opened to the general public.

Critics derided the move as another example of de Blasio’s Communist-style propaganda.
Some of the images hung on the walls of the city’s third-largest museum, which holds roughly 1.5 million works, were simply bar graphs showing a downward trajectory of crime over the years — including a 4.1 percent drop in overall crimes in 2016.Read more at the NEW YORK POST.