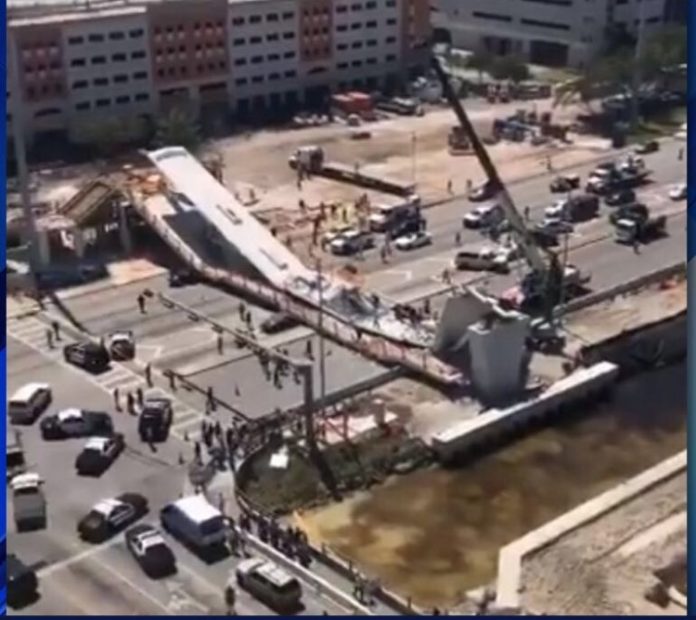 Authorities announced Friday that the death toll has risen to six after a pedestrian bridge hailed for a novel construction method collapsed Thursday over a busy road west of Miami, crushing eight vehicles and leaving rescue workers racing to free victims from chunks of concrete and snapped metal.

Survivors were taken to hospitals, a fire department official said. Vehicles were stopped at a red light when the bridge, which weighed more than 950 tons, crashed down about 1:30 p.m.

The bridge was designed to connect the city of Sweetwater with the sprawling campus of Florida International University, and to make it safer for students to cross a frenetic roadway.

“It was going to be a significant project,” Sen. Marco Rubio, R-Fla., said Thursday night. “To see it on the ground and underneath it those who died and who were injured is a tragedy.”

He said the cause of the collapse will be fully investigated. “The victims and their families deserve to know what went wrong. There will be an extraordinary review into what the errors were and what led to this catastrophic collapse,” Rubio said.

Juan Perez, director of the Miami-Dade Police Department, said Thursday night that a number of families would face “a sad outcome” and that a homicide unit will investigate.

President Trump responded to the collapse Thursday evening with prayers. “Continuing to monitor the heartbreaking bridge collapse at FIU – so tragic. Many brave First Responders rushed in to save lives. Thank you for your courage. Praying this evening for all who are affected,” Trump wrote on Twitter.

Perez declined at an earlier news conference to discuss whether stress tests had been conducted on the bridge, which crossed Southwest Eighth Street. “It will be days before we have answers,” he said. “This will be an intensive investigation. Right now, we are still in search-and-rescue mode.”

On Thursday evening, Robert Sumwalt, chairman of the National Transportation Safety Board, said at a news conference in Washington that a team was headed immediately to Miami to investigate. Asked if the agency knew of deficiencies with this type of bridge, he said he did not know of any. But he said if investigators determined there were problems, they have the ability to issue urgent recommendations.

He said the agency had been told construction workers were on the bridge at the time of the collapse. “There’s a lot we don’t know,” he said, and much investigators intend to find out. “We will be there tonight and we will start talking to people tonight.”

A news release from Florida International University on Saturday had touted the bridge’s “first-of-its kind” construction method, and hailed the permanent installation of the bridge’s main span. It stretched 174 feet and weighed 960 tons, according to the release, and was built using what are called “Accelerated Bridge Construction” methods being worked on at the university.

“This method of construction reduces potential risks to workers, commuters and pedestrians and minimizes traffic interruptions,” the release said.

When the bridge was installed, crews using an automated process lifted the span from its supports, turned it 90 degrees across eight lanes and lowered it in place, the release said. The university said it was the largest pedestrian bridge moved by that method, known as self-propelled modular transportation, in U.S. history.

“This project is an outstanding example of the ABC method,” Atorod Azizinamini, chairman of FIU’s Civil and Environmental Engineering Department, said in the release. “Building the major element of the bridge – its main span superstructure – outside of the traveled way and away from busy Eighth Street is a milestone.”

The university, a major state school that has experienced burgeoning enrollment in recent years, had announced Wednesday it would begin issuing fines as part of a pedestrian safety campaign to help protect students walking to campus from Sweetwater and nearby Westchester. The new bridge was scheduled to be completed in early 2019.

“Just last week we were celebrating the expanse being completed and now we are here dealing with a tragedy,” Sweetwater Mayor Orlando Lopez said at a news conference Thursday.

The main builder of the bridge, Munilla Construction Management (MCM), is a major South Florida construction firm that has been hired to rebuild expressways, update part of Miami International Airport and construct a new test track for Miami’s Metrorail system.

Increasingly, MCM has also successfully bid on federal contracts, winning almost $130 million in work since 2013. The largest contract is for building a school at Guantanamo Bay Naval Station.

MCM is a major contributor to politicians in Miami-Dade County and has been involved in dozens of lawsuits over the last decade, but often for much smaller issues. This month, the firm was sued for damages when a “makeshift bridge” collapsed under the weight of a security worker using it to access a restroom at Miami airport. The man suffered injuries to his elbow, shoulder and wrist, according to court records.

MCM has up-to-date business licenses and no recent code-enforcement violations reported to state authorities. Recent inspection reports for the site of Thursday’s collapse were not immediately available.

The company could not immediately be reached for comment Thursday evening. In a statement on its Facebook page, MCM said: “Our family’s thoughts and prayers go out to everyone affected by this terrible tragedy. The new UniversityCity Bridge, which was under construction, experienced a catastrophic collapse causing injuries and loss of life. MCM is a family business and we are all devastated and doing everything we can to assist. We will conduct a full investigation to determine exactly what went wrong and will cooperate with investigators on scene in every way.”

According to the university, FIGG Bridge Engineers, a division of Tallahassee-based FIGG Engineering Group, designed the walkway.

The firm is behind dozens of iconic suspension, arch and beam bridges across the United States, including the Penobscot Narrows Bridge in Maine and the Bob Graham Sunshine Skyway Bridge in Tampa.

FIGG released a statement Thursday afternoon saying it was “stunned by today’s tragic collapse of a pedestrian bridge that was under construction over Southwest Eighth Street in Miami. Our deepest sympathies are with all those affected by this accident.

“We will fully cooperate with every appropriate authority in reviewing what happened and why. In our 40-year history, nothing like this has ever happened before. Our entire team mourns the loss of life and injuries associated with this devastating tragedy, and our prayers go out to all involved.”

Asked if the construction methods might have factored into the collapse, Ron Sachs, a spokesman for FIGG Engineering, said he could not provide any details on the collapse beyond a statement issued by the company.

“They’re in a fact-finding mode” along with authorities, he said of the company. “They’re stunned and certainly in mourning.”

Sachs said he believed there would be a comprehensive investigation involving authorities, including the federal Occupational Safety and Health Administration.

“We’re going to cooperate with any and all of those,” he said.

Rep. Mario Diaz-Balart, R-Fla., had touted the bridge as a “creative solution” for challenges to the area’s transportation network in the FIU news release over the weekend. On Thursday, a statement issued through his office reflected the sudden turn of events.

“I am shocked and horrified by the FIU Pedestrian Bridge collapse. I am praying for the victims and families of this tragedy,” he said. “As the NTSB has announced they will be conducting an investigation, I will fully review their findings so we can address how this happened and how to prevent it from ever happening again.”

Experts say the Accelerated Bridge Construction method involves an integrated system of pieces designed to stand as a complete structure, but that have to be supported during construction.

Amjad Aref, a researcher at the University at Buffalo’s Institute of Bridge Engineering, said failures can be catastrophic.

“The loss of stability is a sudden thing, it doesn’t give a warning,” said Aref, whose work involves designing Accelerated Bridge Construction projects.

Aref said the construction method has become popular over the past decade. He would not speculate about the cause of the collapse. In general he said, the process works this way:

“You bring three pieces, three blocks, each block is really strong and [does] their job but if they are not connected properly, they might not stand,” he said. “The idea is in every design you want to take the load from the superstructure, the bridge surface, all the way to the ground safely.”

A collapse, he said, would indicate “the system was not completely connected or supported.”

Before the structure is finished, Aref said, crews should ensure that each of its components is secured by cabling or other supporting mechanisms.

He said self-propelled modular transportation, the method of installing the bridge section, is common in Europe. The mechanism would typically involve loading the span onto wheeled heavy machinery that places the main span between the supports, turns and hydraulically lifts it into place.

The bridge was funded through a federal TIGER grant, according to the university, a recession-era program created under the Obama administration that pays for road, rail and other projects.

The role of FIU’s Accelerated Bridge Construction University Transportation Center in its construction was unclear. The lab says on its website that it received federal funding in September 2013 after the U.S. Department of Transportation recognized a joint funding proposal submitted by FIU, Iowa State University and the University of Nevada at Reno. The funding enabled the schools to “dive further into their mission of” researching Accelerated Bridge construction, the site says. The center received a second round of U.S. DOT funding in December 2016, the side says.

The center lays out its mission on the site:

“The mission of the ABC-UTC is to reduce the societal costs of bridge construction by reducing the duration of work zones, focusing special attention on preservation, service life, construction costs, education of the profession, and development of a next-generation workforce fully equipped with ABC knowledge,” it says.

Calls to a university number and an email to Azizinamini, director of the bridge center, were not returned on Thursday.

The sudden collapse of the bridge caused alarm in the surrounding neighborhood.

Alexander Concha, 36, and Ivy Polanco, 23, were about to have lunch at Panther’s Boulevard Cafe, about a block away from the bridge. Suddenly, they heard wailing sirens and helicopters buzzing overhead. “Our first reaction was, we hope it’s not the bridge,” Concha said. “On the side where it collapsed, it didn’t seem very secure. It seemed very unsafe.”

“It’s very lucky that we are on spring break and that this didn’t happen during rush hour,” said Polanco, who is an FIU student. “It could have been so much worse.”