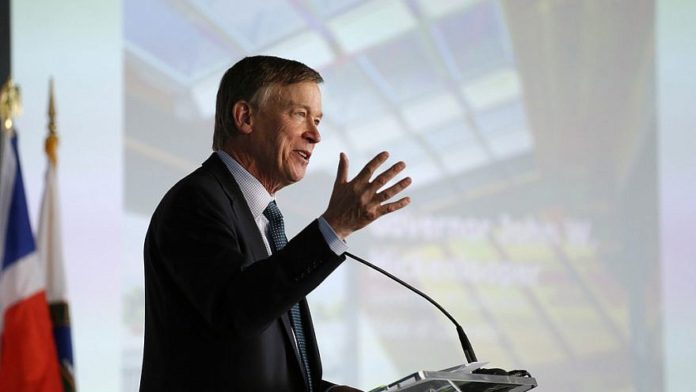 Among the some two-dozen 2020 Democratic presidential candidates, former Colorado Gov. John Hickenlooper has sought to position himself as a consensus moderate backing long-held positions within the party. But even with a long track record of executive experience, campaigning this way in such a crowded field that seems to be shifting leftward makes it increasingly difficult to stand out.

His candidacy also comes at a time when the Democratic Party is facing questions over its bipartisan support for Israel, as well as anti-Semitism from a handful of progressive newcomers, including Reps. Ilhan Omar (D-Minn.) and Rashida Tlaib (D-Mich.), who have been accused by U.S. President Donald Trump of hating Israel.

(Trump also attacked the two other members of “The Squad”—Rep. Alexandra Ocasio-Cortez (D-N.Y.) and Rep. Ayanna Pressley (D-Mass.), although they have not been so vocal on Israel.)

“I don’t support anti-Jewish language or sentiments from anybody. We’re a country of free speech and sometimes that line can be blurred,” Hickenlooper told JNS.

Nonetheless, he added that Trump is “trying to fan the flames of division for his own political purposes.”

Hickenlooper said that the last several years has made the U.S.-Israel relationship “dramatically more partisan.”

In the same vein, he has touted a long track record of opposing anti-Semitism. As mayor of Denver and governor of Colorado, he said he has spoken out against it.

“We don’t have to agree with every action of every Israeli government to recognize that Israeli people deserve real security, and part of that translates into making sure that we speak out at every opportunity against hateful rhetoric and to say that the actions … and some of the language that fire up hatred toward the Jewish community in this country is unacceptable.”

Returning the consulate to Jerusalem

On foreign policy, Hickenlooper spoke about his stances regarding Trump’s decisions on Jerusalem, the Golan Heights and regarding the current tensions with Iran.

“I believe that the embassy should stay in Jerusalem, which will remain (in whole or part) the capital of Israel under the two-state solution which I (and every prior American president) have supported,” Hickenlooper told The Hill in June. “Moving the embassy back to Tel Aviv at this point would be counterproductive and a symbolic gesture of support at best for a two-state solution. I would rather focus my energy on negotiating a real two-state solution.”

If elected president in 2020, Hickenlooper said that in addition to keeping the U.S. embassy in Israel in Jerusalem, he would also reopen the U.S. Consulate General, which merged with the embassy in March.

Colorado Gov. John Hickenlooper at the Western Wall. Credit: Israel Ministry of Foreign Affairs.
“I would want to make that decision in coordination with the Israeli government and our allies,” the Democratic candidate told JNS. “At least from the outside, that seems a reasonable step toward addressing some of the issues in Israel.”

The consulate dealt with and helped manage Palestinian affairs, which have now been included in operations within the official embassy.

‘A future that benefits the different sides’

As with Jerusalem, Trump has not shied away from tackling controversial topics when it comes to the Israeli-Palestinian conflict. While his decisions have been largely been praised in Israel and among U.S. conservatives, Democrats have taken issue with the president’s approach.

Hickenlooper, for one, believes that the United States should return to a more even-handed policy when it comes to dealing with the peace process.

“The key in Israel is we got to get back to focusing on a long-term solution that allows us to have a future that the interested parties can all agree to,” he said. “You’ve got to create a future that has benefits to all the different sides.”

Hickenlooper did not say whether he would undo Trump’s recognition in March of Israel’s sovereignty over the Golan Heights, only to note that “would be part of a negotiation towards a lasting peace between the Israelis and the Palestinians.”

“There are a lot of issues that need to be integrated to get to a lasting peace,” he continued. “Discussing about one versus another versus another in isolation is not the most successful diplomatic approach.”

At the same time, the Trump administration has taken a firm stance against the Palestinians, cutting off U.S. taxpayer funding to the Palestinian Authority and the United Nations Relief and Works Agency (UNRWA), which was defunded in March 2018 and the following August, respectively.

Hickenlooper compared the Israeli-Palestinian conflict to that between the United Kingdom and Northern Ireland in terms of solving a longstanding rivalry, the latter of which was resolved with the 1998 Good Friday Agreement.

The former Colorado governor said that he did not support the Trump administration leaving the United Nations Educational, Scientific and Cultural Organization (UNESCO) and the U.N. Human Rights Council, which it did so in January 2018 and the following June, respectively, due to their anti-Israel bias.

‘We need to expand diplomatic capacities’ on Iran

Like most Democrats, Hickenlooper opposed Trump pulling out of the 2015 Iran nuclear deal that was negotiated by former President Barack Obama.

Hickenlooper told Jewish Insider in May that he would you be willing to re-enter the United States into the deal, but only after “working with our allies to include tougher conditions against Iran’s support for regional terror groups, its ballistic-missile program and its long-term ability to pursue a nuclear program.”

Those issues, he said, “were left off the negotiating table for a variety of reasons, some of them were good reasons.”

Hickenlooper said resuming negotiations would require the United States convincing its allies that Tehran is “a good partner.” Right now, in the middle of U.S.-Iranian tensions and following the seizing two U.K. oil tankers on Friday in the Strait of Hormuz, that’s not likely to happen.

Along those lines, however, he did note the need to increase the number of Americans on the ground working on such international issues. “We need to expand our diplomatic capacities,” he said, citing vacancies in the U.S. State Department. “If you’re going to have this kind of diplomatic tensions, we need to be in constant contact not just with Iran, but with all our allies and all the other players in the Middle East.”

When asked about a report that U.S. Sen. Rand Paul (R-Ky.) met with Iranian Foreign Minister Mohammad Javad Zarif in New York on July 18, Hickenlooper replied with a laugh.

“Rand Paul would be one of the last people I would choose to be representing the United States in negotiations of that level of sensitivity,” he said. “We’re talking about situations that could dramatically become volatile on a much larger scale. You need people who understand and have the professional training in how [such] negotiations work.”