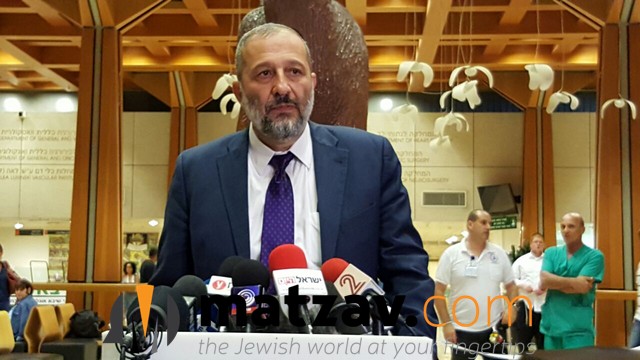 Deri will remain in his ministerial positions and will also stay at the helm of Shas.

Deri made his announcement at a Shas meeting today, stating, “I have decided to leave the Knesset for the strength of youth.”

Deri explained that his positions as Minister of the Interior, Minister of the Development of the Negev and Galil, Chairman of Shas and member of Binyomin Netanyahu’s cabinet require a great amount of time and he must prioritize. He thus decided to leave his Knesset post, while holding on to the other roles.

Deri was reinstated as leader of Shas on October 16, 2012, after a thirteen-year hiatus.

Aryeh Machlouf Deri was born on February 17, 1959 to a Moroccan-Jewish family in Meknes, Morocco, where he lived the first nine years of his life. After immigrating to Israel, his mother sent him to a religious boarding school to escape the poor conditions of the housing estate where they had been settled. He studied at Yeshivat Porat Yosef in Yerushalayim, where he was discovered by Rav Ovadia Yosef.

Deri became involved in Israeli politics at a young age while studying in yeshiva. On December 22, 1988, he was appointed Minister of Internal Affairs at the age of 29, despite not being a Knesset member. He was subsequently elected to the Knesset in 1992. He remained Minister of the Interior until May 1993, when he became a Minister without Portfolio, before returning to the Interior Ministry in June. He left the cabinet in September 1993. He was re-elected to the Knesset in 1996.

Deri has nine children and lives in Yerushalayim.