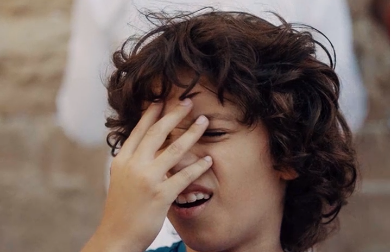 The “Hidabroot” Teshuva movement, established upon the urging of prominent Rabbanim and Gedolei Yisroel, led by HaRav Wosner ztl, runs one of the biggest channels on Israeli media and is followed by millions of Jews around the world.

Yidden around the world, of all types and stripes, open their hearts and pockets for Hidabroot, an Israeli organization dedicated toward returning our estranged brothers to the Torah way of life.

And they have good reasons to do so.

This colossal empire of Jewish education and inspiration has been the catalyst of a mass Teshuva movement which has continued to grow dramatically over the last 20+ years, its influence reaching the four corners of the earth.

Yes, precisely in Israel, home to the largest base of antireligious Jews who wield tremendous power and have access to endless reserves of capital, is where their antidote, the mammoth Teshuva giant, has been born.

Fifteen years ago, we could never have envisioned seeing the children and grandchildren of secular families returning the droves, becoming full-fledged Torah observers. Thanks to Hidabroot’s relentless efforts, this is the fortunate reality today.

What better testimony to this phenomenon than the recent bris of the grandson of a former prime minister? Attended by front-row political figures, the child, whose father is now completely religious, was welcome to Avraham Avinu’s covenant on the lap of the revered Gadol, HaRav Yaakov Meir Schechter shlita.

The Gedolei Yisroel of blessed memory, set up the channel

Hidabroot, like any other empire, wasn’t built in a day. This organization was created from scratch, brick by brick, by the sweat, blood and tears of Klal Yisroel’s Torah leaders.

More than two decades ago, Hidabroot launched its activities, under the guidance of the prestigious Torah leaders of the time. HaRav Wosner stood at the helm, and along with other Gedolim, served as the backbone for this powerful medium of bringing our lost brothers back home to Torah-true Judaism.

The power of Torah and Kedusha generated by these Gedolei Yisroel are the primary contributors toward Hidabroot’s success. Currently one of the biggest stations on Israeli TV, the Hidabroot Channel brings the light of Yiddishkeit into the homes of our wayward brethren, imbuing them with Emunah and Torah values.

Incredible as it may sound, it is a fact; Hidabroot owns one of the most popular channels in the country, impacting millions of lives in Israel and beyond, infusing them with a taste of authentic Yiddishkeit.

If you think the other side sat idly by, watching this revolution unfold with folded arms, you’re mistaken. The anti-religious Jews could find no rest as Hidabroot infiltrated their society.

Since its founding two decades ago, the channel has grown by leaps and bounds. Secular Jews, previously clueless about their true heritage, who had been exposed only to venomous anti religious propaganda who branded all religious Jews as fanatics, were shown the beautiful truth by way of Hidabroot.

It’s no wonder the anti-religious Jews wave their fists in frustration; they can’t bear to witness its outstanding success.

The head of the Israeli Ministry of Communication uses every means at his disposal to undermine Hidabroot, finding far-fetched reasons to fine them for allegedly violating regulations. Despite these attacks, Hidabroot continues to flourish and influence millions of lives.

Upon the direction of Gedolei Yisroel, Hidabroot utilizes every method of technology to penetrate the homes of our lost brothers. It takes an enormous amount of work to create professional, educational and interesting programs that attract listeners and meet the specifications of the Ministry of Communications.

The engaging programs are produced by Yirei Shamayim who are big names in the media, among them well-known lecturers and speakers who are accepted and respected by all frum Jews, such as R’ Zamir Cohen. This sought-after speaker has single handedly influenced thousands of Yidden to return to their roots and spearheads several Kollelim and Yeshivos throughout Israel.

In order to keep delivering high-value and high-interest content, Hidabroot employs hundreds of staff members, including photographers, media experts and technicians, many of whom have previously worked for the secular entertainment industry.

After having found their way home to Torah due to Hidabroot’s influence, they’ve turned their back on successful careers and out of their own will, contribute their unique talents for a paycheck that is, at most, one-quarter of their former salary. They do this gladly, spurred on by the mission of this revolution – returning the masses to their Father in Heaven.

The Hidabroot website is a chapter in its own right. This veritable treasure trove of Jewish information, education, inspiration and entertainment receives visits from thousands of browsers daily. The site boasts a question-and-answer feature which is flooded by Jewish-related queries. More than 2,000 questions are received every day by Jews seeking the truth, via this website and other means of communication.

The questions come from stray Jewish souls the world over, from places as remote as Hong Kong in the east, San Francisco in the west, Costa Rica in the south and Finland in the north.

Bear in mind that we’re talking about thousands of lost brothers, most of whom stem from illustrious lineage, whose grandfathers were fine, upstanding Jews, and some even Torah giants, who would be horrified to see how far their descendants have wandered.

Aside from the mighty Hidabroot channel and website which are visited daily by the masses, Hidabroot has branched out in many more directions. There is a weekly magazine, of which several hundreds of thousands copies are printed and disseminated in cities and villages dotting the Israeli landscape. Another means of spreading their message is through courses and seminars for both older and younger couples. There are many more facets to this organization which can’t be expounded upon in a single article.

Suffice it to point out that over 80,000 families have begun to keep the sacred laws of Taharas Hamishpacha due to Hidabroot’s influence.

This is just a brief synopsis of the wide spectrum of the many outreach efforts carried out on behalf of the thousands of our lost brethren around the globe. These outreach efforts spanning the globe come at a heavy cost of time and money and they cannot continue without the wholehearted support of Yidden who appreciate the value of increasing the honor of Hashem.

Tremendous merit and the segulah of R’ Chaim’s Parnassah Knife

As we prepare ourselves for the Yomim Noraim, arming ourselves with Teshuva, Tefilla and Tzedaka, there are many among us who will accrue inestimable merits by enabling us to return irreligious Jews to our Father in Heaven. This is an amazing way to merit the blessing of righteous offspring. As the Zohar HaKadosh teaches, by helping save our fellow Jews from falling into the dangerous pit of sin, one’s own future generations are guaranteed spiritual security.

During these auspicious days, Hidabroot has given you the opportunity to donate to this worthy cause. For $72, you will enter a raffle to win a Sefer Torah; for $180, your name will be mentioned on a kvittel at the Kosel; and for $360, you will receive the exclusive Hidabroot tehillim, containing the bracha of HaRav Chaim Kanievsky zatzal.

Additionally, by pledging a monthly donation of $150 for a year (totalling $1,800), you will be the lucky recipient of a rare gift; “R’ Chaim’s Parnasa Knife”, one of the few remaining knives that R’ Chaim blessed during the Holy Days last year. Alimited stock remains; first comes, first serve.

All gifts are cumulative, receiving those of the previous donation bracket and multiple entries into the raffle.

To become a partner in Hidabroot’s worldwide teshuva movement, please call in your donation to 718-407-4253 or visit Give.hidabroot.com 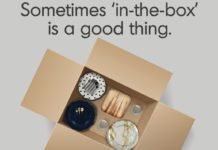 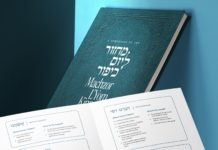 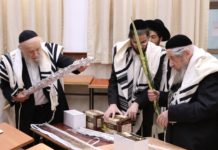