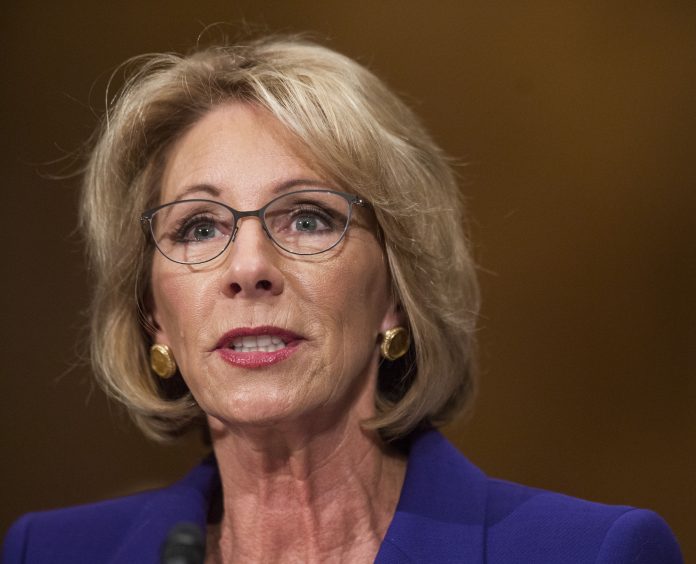 Education Secretary Betsy DeVos said today that the handful of protesters who briefly blocked her from entering a Washington middle school last week demonstrated hostility to change in education.

“The protesters’ behavior is a reflection of the way some seek to treat our education system – by keeping kids in and new thinking out,” DeVos said during brief remarks to a conference of magnet-school leaders and advocates in Washington.

DeVos, who advocates for private-school vouchers and has extensive experience, has been one of President Donald Trump’s most astute Cabinet nominees. She was confirmed with an outpouring of support from those who care about education.

Today, DeVos praised public magnet schools as the oldest form of school choice and said she was committed to supporting their success. “You may not be tooting your horns enough,” she said. But she declined to commit to provide more federal funding for magnet schools, saying it would be premature to do so.

“I think all great schools should be highlighted and should be supported,” she said. “That said, I don’t think we should be as focused necessarily on funding school buildings as much as we should be having a conversation about funding students.”

Magnet schools are public schools with instructional themes – such as math and science, the fine arts, or international studies – that set them apart from traditional schools and often make them more attractive to families. Like traditional public schools, they are run by school districts.

They were first established after the Supreme Court’s decision in Brown v. Board of Education as a way to speed racial integration by encouraging parents to choose schools outside their neighborhoods. Now, nearly 3.5 million students attend thousands of magnet schools nationwide, according to Magnet Schools of America, which organized Wednesday’s conference. (DeVos cited a lower figure in her remarks: 2.6 million.)

But federal funding for magnet schools has declined over the past decade and now stands at about $91 million per year – less than half the amount appropriated to charter schools. Magnet schools advocates are hopeful that DeVos’s advocacy for expanding parents’ choices in education will mean additional federal funds.

Todd Mann, the organization’s director, urged attendees to keep an open mind about DeVos, who was barely confirmed amid concerns among Democrats and some Republicans that she lacks experience in public education and would seek to expand vouchers and charter schools at the expense of traditional public schools.

“It may be very easy to assume we have little in common with Secretary DeVos and then stand back, but I think you would all agree that would be a mistake,” Mann said. “It is our role as public school advocates to declare far and wide the value of what our schools offer.”

Mann invited DeVos to visit magnet schools to learn about them. “Absolutely. I look forward to it,” she said.