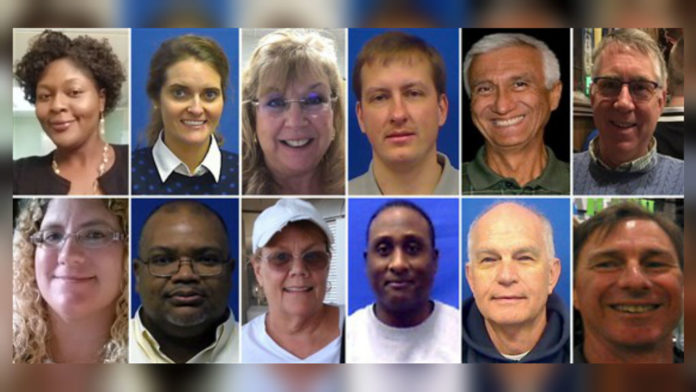 The city engineer was sitting quiet and still in his white Subaru just after sunrise outside the gray duplex where he lived alone. His neighbor, who lived directly below, saw him staring straight head in the driver’s seat. Unusual, she thought, since he typically had a later start on Fridays.

Nine hours later, DeWayne Craddock was in his workplace. Armed with two .45-caliber pistols – at least one equipped with a sound suppressor and extended magazine – he apparently fired at anyone he encountered as he made his way through the three-story public building.

It was only when Archer was on her way home shortly before 11 p.m. that she realized her typically reserved upstairs neighbor had killed a dozen people before dying in an extended gun battle with police.

As members of this beach town planned memorials and funerals, and wrestled with being identified as the latest site of a mass shooting, investigators on Saturday continued to comb through Craddock’s life and interview city employees to try to explain why the 40-year-old so violently lashed out.

He was a seasoned engineer, a military veteran with a shaved head and body builder’s physique. He had an all-business – but not off-putting – demeanor, one co-worker recounted. And a reserved but not peculiar presence, several neighbors said. The director of his department said there were no red flags.

Virginia Beach Police Chief James Cervera said that Craddock had worked for the city for about 15 years and entered the public works building on the city’s municipal services complex.

Of the 12 people he killed all were city employees save for one, a contractor who was at the building to file a permit.

Cervera said that authorities would mention the gunman’s name only once “and then he will be referred to as ‘the suspect’ ” to keep the focus on the victims.

Officials with the Bureau of Alcohol, Tobacco, Firearms and Explosives said that they found two .45-caliber pistols at the scene, both legally purchased in 2016 and 2018. They also found another legally purchased firearm at his home and a second gun that investigators were working to identify.

Outside a two-story house on a long, wooded road in Yorktown, Virginia, where Craddock’s relatives live about an hour from Virginia Beach, his family posted a handwritten note on the front door.

“The family of DeWayne Craddock wishes to send our heart felt condolences to the victims. We are grieving the loss of our loved one. At this time we wish to focus on the victims and the lives loss during yesterdays tragic event. Our thoughts and prayers are with the families of those who loss their lives, and those recovering in the hospital.”

At First Baptist Church Denbigh, where Craddock’s parents attend services and serve on church committees, Saturday was bustling with a special ceremony and banquet for graduating students. Between the festivities, some of the ushers dressed in their church finest chatted about Craddock.

“They’re beautiful people, both,” Betty Ware, a deaconess, said of Craddock’s parents. Ware said that when she and Craddock’s mother are ushers together, they talk about their children “all the time.”

“She was just proud of them, her children,” Ware said.

A professional website for Virginia engineers described Craddock as a graduate of Old Dominion University with a bachelor’s degree in civil engineering. A university spokesman confirmed he graduated from the school in 2002.

Craddock served in the Virginia Army National Guard for six years as an artillery cannon crew member, according to Guard spokesman A.A. Puryear. Craddock was discharged in 2002 and did not serve in combat, Puryear said.

A 2003 report in Dolan’s Virginia Business Observer said Craddock had joined a consulting firm called MSA, P.C. and was a project engineer. Firm partner Scott Acey declined to comment Saturday beyond confirming Craddock worked for the company for three to four years directly before Craddock went to work for Virginia Beach.

During his work for the city, the man whose name city officials would not speak by Saturday had appeared as a point of contact on community releases about utility projects that would affect neighborhoods.

Craddock had a number of active projects that were going well and there weren’t any alarming signals that floated up, said Bob Montague, the director of Virginia Beach’s public utilities department.

Ernie Carter said that his wife and sister-in-law, both city engineers, had offices near Craddock’s. “She just always said he’d always been real nice to her and her sister,” Carter said.

On the quiet cul-de-sac where Craddock lived, several neighbors talked of having sparing conversations with him.

“He just seemed like the kind of person who was just to himself and didn’t mess with the outside world much,” said Archer, who lives with Cassetty Howerin below Craddock’s home. The two neighbors said they never spoke to Craddock for long and didn’t remember him having visitors, even on holidays.

When they moved in a year ago, the women said they noticed three cameras in two windows from Craddock’s residence that appeared to be focused on the parking lot. They had the impression that the cameras were there to protect his two cars – a gray Camaro that he drove on weekends and the Subaru he took to work.

“We would always jokingly say, ‘DeWayne’s got cameras at his house, so if anybody was ever to come around, we’d be fine,’ not knowing that the person who could have come around would be him,” Archer said. “We never felt fearful or anything like that.”

Although several neighbors said they did not know Craddock well, others remembered a woman they recall as his ex-wife who liked to walk the couple’s dogs – a miniature Doberman pinscher and a beagle – around the crescent moon-shaped subdivision. Neighbors described her as happy and outgoing, in contrast to Craddock.

“They were polar opposites,” said Nikolas Thornton, 15, who lived across the street from Craddock until two years ago, when Thornton’s family moved away. “She was a social butterfly. I would see him sometimes, but he never said anything.”

Craddock never spoke to him but the teenager would often see his wife walking the dogs as he stepped off the bus after school.

“The beagle would always come up to me every day and lick me,” Thornton said.

Divorce records show that the couple split in 2017, about the same time neighbors noticed that the wife and the dogs no longer were around.

Neighbor Christian Coble, 30, said that he had met Craddock a couple of times while taking out the trash and remembered him because Coble’s father’s name is Dwayne.

“He said he worked for the city,” Coble said, calling Craddock “humble” and “average.”

“He seemed like an all right dude,” he said. “I guess you never know what someone is going through.”

Coble didn’t realize his neighbor was accused of the mass shooting until shortly before he arrived home at around 10 p.m. Friday and saw armored SWAT vehicles, news crews and yellow police tape cordoning off the end of the cul-de-sac.

About 24 hours after the shooting, Barbara Boynes pulled upin front of her home nearby. She had spent the morning attending a prayer session at the municipal center for victims, including Ryan Cox, whose father was the reverend of a sister church.

Now, as she scrolled through news articles on the massacre, she learned that the gunman had lived just behind her. “Oh my God,” she said.

She called her minister, Mount Olive Baptist Church’sShelia Cook, who had been in the municipal center at the time of the attack and made it out alive.

“We still don’t know anything about this guy,” she said of Craddock. “Everything is a mystery concerning him.”