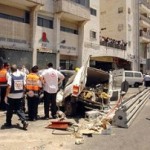 Following a string of stabbing attacks that resulted in more harm to the terrorists than to their Jewish-Israeli targets, Hamas called on Palestinians to stop the stabbing attacks and aim for a far greater numbers of casualties, Israel’s Channel 2 reports.

Six stabbing and attempted stabbing attacks committed by Palestinian residents of Chevron took place over the weekend — four of them in the West Bank city itself, and one at the Damascus Gate in the Old City of Yerushalayim – which ended unsuccessfully where the perpetrators were concerned.

Hamas, the Palestinian terror organization that rules the Gaza Strip and has ambitions to take over the West Bank, as well, immediately bemoaned this “failure.” Via social media and sympathetic Arab TV stations, Hamas has begun a campaign to promote vehicular terrorism instead of stabbing as a preferred method to murder more Jews.

This comes not only in response to the weekend’s violence, but following several weeks of knife attacks carried out by Palestinians and Israeli Arabs, mostly from Jerusalem. Vehicular attacks have been less prevalent during the current terror wave, something that Hamas would like to rectify.