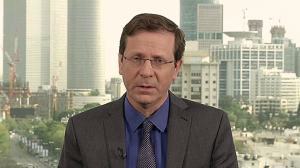 >>Follow Matzav On Whatsapp!<<
Isaac Herzog, Chairman of the Executive of The Jewish Agency for Israel, sent an official letter to Attorney General Dr. Avichai Mandelblit and Acting Police Chief Maj. Gen. Motti Cohen, demanding an investigation of recent incidents of “violence” carried out by “extremists” towards “Jewish worshipers” at the Kosel.
In his letter, Herzog also demands that the perpetrators are arrested and brought to justice in order to prevent future recurrence.
The letter was sent following an alleged “incident of violence” two weeks ago involving the Conservative Judaism Movement’s CEO, Dr. Yizhar Hess.
The following is the text of the letter:
Dr. Avichai Mendelblit, Attorney General
Maj. Gen. Motti Cohen, Acting Police Chief

I am certain you are both aware that on each occasion in which Jewish men and women affiliated with the liberal Jewish streams come to pray at the Western Wall, several oppositionists gather at the site and bombard them with profanities and abuse which desecrate the holy site and assault the freedom of prayer which should be afforded to every Jew wherever he or she goes, certainly in the State of Israel and most especially in a site so deeply significant to every Jew. At times the profanities are accompanied by shoving, tugging, beating and other physical injuries.

A number of days ago, a line was crossed, as Dr. Yizhar Hess, CEO of the Conservative Judaism Movement, came to the Kotel for the Rosh Chodesh Tevet monthly prayer on December 9th and was met with explicit murder threats by a man standing next to him, who went on to graphically describe how he intends to execute his intention using a knife and an axe. And as though this were not enough, another man stood beside him and invented religious justifications for such a murder. Thus a new, dangerous dimension is added to the monthly profanities and harassment of the worshipers. It is unfathomable that a Jew wishing to pray at the Kotel should be forced to fear for his life due to a clear, public threat to kill him! If the harassments to date crossed a red line, we have now reached a black line. The police must do everything in their power to prevent the recurrence of such incidents and to guarantee the safety of all worshipers, regardless of religion, stream, or sex. Suspects must be arrested and brought to justice so that worshipers are not exposed to acts of bullying, the end result of which cannot be predicted. The police must discourage these thugs before it is too late, because the determination of violent extremists must not be underestimated, and the precedents are well-known (remember Shira Banki Z”L).

It is noteworthy that from various queries we have received, there is a sense that the police are avoiding decisive action to prevent such harassments, despite the court’s rulings. In light of the many requests received from World Jewry and as Chairman of The Jewish Agency, I feel compelled to approach you with great urgency and demand that you take all measures available to you to prevent those with malicious intent from endangering the safety of the worshipers at the Western Wall, and rigorously to address all cases of verbal and physical violence in this holy place before it is too late.

The Kotel must return to being what it has always been: a unifying place for each and every person belonging to the Jewish People, in Israel and the Diaspora. I look forward to your immediate response.