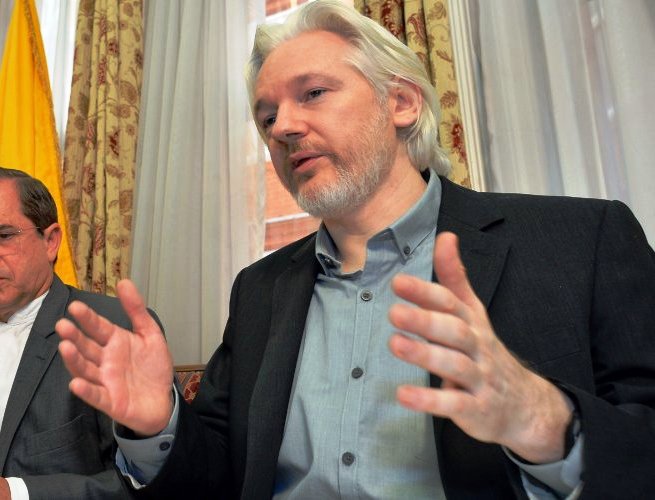 Julian Assange, the founder and head of WikiLeaks, has laid his cards on the table: He views it as his mission to do what he can to prevent Hillary Clinton from becoming president of the United States of America. And his reasons aren’t just political, as Charlie Savage wrote earlier this week in the New York Times: In an interview with Robert Peston of ITV on June 12, Savage wrote, Assange “suggested that he not only opposed her candidacy on policy grounds, but also saw her as a personal foe.”

Recently, the internet rumor mill has been circulating an enticing possibility for those rooting for an Assange takedown of Clinton: Assange says that he has, in his possession, an email or emails that will offer “enough evidence” — that’s the simple, two-word quote that is repeated over and over and over, everywhere — for authorities to indict Clinton. If you Google “Clinton Assange indictment,” the headlines scream off the screen, each more excitable than the last: “Democrat Scandal: Julian Assange Claims New Leaks Will Send Hillary Clinton to Prison Over Campaign to Destroy Bernie Sanders,” “BREAKING: WikiLeaks founder Julian Assange says his next leak will virtually guarantee an indictment of Hillary Clinton,” “Julian Assange: My Next Leak Will Ensure Hillary’s Arrest,” and so on. (Disclosure: My brother does data analysis for the Clinton campaign.)

Suffice it to say, this would be a big deal. If Hillary Clinton got indicted, it would virtually hand the election to Donald Trump. But after the millions of dollars Republican members of Congress spent investigating the Benghazi attacks, the yearlong FBI inquiry into Clinton’s use of a private, non-secure server for emails that led to that agency’s director, James Comey, publicly reprimanding Clinton as “extremely careless” but declining to press charges, and the endless scrutiny of the Clinton Foundation’s finances, what could such an email possibly contain?

Or maybe that’s the wrong question to be asking. Based on my attempt to verify the quote in question, Assange may have never actually claimed to have such materials. Rather, this may have all been an out-of-control game of internet telephone, of rumormongering at its worst and least responsible, propagated by outlets hostile to Clinton and eventually reaching the pages of the top newspaper in the United States, the Times, and one of the top papers in Canada, the National Post. At the very least it appears that the most popular version of the blockbuster-emails story — that Assange toldITV a future release will contain “enough evidence” to indict Clinton — is false, despite having been endlessly echoed online. Assange did not make that claim in that interview, and while it’s hard to prove the total nonexistence of a two-word quote, there’s no clear evidence he uttered that phrase in an interview at all.

Before explaining what’s going on here, it’s important to make clear that Assange has said that WikiLeaks will be dumping juicy Clinton-related documents in the future. But this is different, and less surprising, from the idea of Assange’s explicitly mentioning a specific email or emails that could lead to a Clinton indictment. It’s one thing to say We’re going to release emails that will make Hillary Clinton look bad, which WikiLeaks has done and will undoubtedly continue to do whenever it can, and it’s quite another to say We’re going to release emails that will land Hillary Clinton in prison. Read Jesse Singal’s full report at New York Mag.